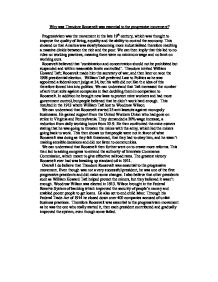 Why was Theodore Roosevelt was essential to the progressive movement?How far do you agree?

Why was Theodore Roosevelt was essential to the progressive movement? Progressivism was the movement in the late 19th century, which was thought to improve the quality of living, equality and the ability to control the economy. This showed us that America was slowly becoming more industrialized therefore resulting a massive divide between the rich and the poor. We can then imply that this led to no rules on working practices, meaning there were no minimum wage and no limit on working ours. Roosevelt believed that 'combination and concentration should not be prohibited but suspended and within reasonable limits controlled'. ...read more.

In addition he brought new laws to protect mine workers and had more government control, but people believed that he didn't work hard enough. This resulted in the 1913 where William Taft lost to Woodrow Wilson. We can understand that Roosevelt started 25 anti lawsuits against monopoly businesses. He gained support from the United Workers Union who had gone on strike in Virginia and Pennsylvania. They demanded a 20% wage increase, a reduction from daily working hours from 10-9. He then confronted the mine owners stating that he was going to threaten the mines with the army, which led the miners going back to work. ...read more.

Even though was not a very successful president, he was one of the first progressive presidents and did make some changes. I also believe that other presidents such as William Howard Taft helped protect the miners, but they believed it wasn't enough. Woodrow Wilson was elected in 1913. Wilson brought in the Federal Reserve System of banking which improved the security of people's money and enabled poorer people to get loans. He also set to end child labor. Through his Federal Trade Act of 1914 he closed down over 400 companies accused of unfair business practices. Therefore Roosevelt was essential to the progressivism movement as he was the one who really started it, then each president contributed and gradually improved the system, even though some failed. ...read more.