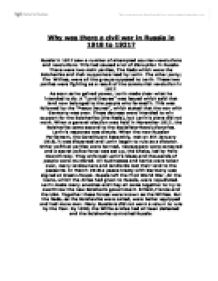 Why was there a civil war in Russia in 1918 to 1921? Russia in 1917 saw a number of attempted counter-revolutions and revolutions. This had caused a lot of disruption in Russia. There were two main parties, The Reds which were the Bolsheviks and their supporters lead by Lenin. The other party; The Whites, were all the groups opposed to Lenin. ...read more.

These decrees were intended to win support for the Bolsheviks (the Reds), but Lenin's plans did not work. When a general election was held in November 1917, the Bolsheviks came second to the Socialists-Revolutionaries. Lenin's response was simple. When the new Russian Parliament, the Constituent Assembly, met on 5th January 1918, it was dispersed and Lenin began to rule as a dictator. ...read more.

Russia left the First World War. All the loans, which the Allies had given to Russia, were repudiated. Lenin made many enemies and they all came together to try to overthrow the new Bolshevik government. Britain,France and the USA. Together these forces were known as the Whites. But the Reds, as the Bolsheviks were called, were better equipped and had more men. Many Russians did not want a return to rule by the Tsar. By 1920, the White armies had all been defeated and the Bolsheviks controlled Russia. ...read more.