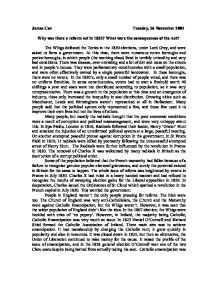 Why was there a reform act in 1832? What were the consequences of the Act?

James c*x Tuesday, 26 November 2002 Why was there a reform act in 1832? What were the consequences of the Act? The Whigs defeated the Tories in the 1830 elections, under Lord Grey, and were asked to form a government. At this time, there were numerous rotten boroughs and pocket boroughs, in which people (the working class) lived in terribly unhealthy and very bad conditions. There was disease, over-crowding and a lot of dirt and mess on the streets and in people's houses. They were parliamentary constituencies with a small population, and were often effectively owned by a single powerful landowner. In these boroughs, there were no voters. In the 1830's, only a small number of people voted, and there was no uniform franchise. In some constituencies, voters had to own a freehold worth 40 shillings a year and seats were not distributed according to population, so it was very unrepresentative. There was a growth in the population at this time and an emergence of industry, these only increased the inequality in seat distribution. Growing cities such as Manchester, Leeds and Birmingham weren't represented at all in Parliament. Many people said that the political system only represented a few, and those few used it to improve their own lives but not the lives of others. ...read more.

They smashed machinery, set fire to hay bails and caused general mayhem. The pressure for reform from the population was great, and when the Tories were in power, there was not much chance of reform because they were very much against it. But, the Whigs under Lord Grey were not against reform. The Whig government was very committed to parliamentary reform, and had recognised that the old unreformed electoral system was defective. Lord Grey argued that the electoral system should reflect the economic contribution now made by the middle and upper classes. He wanted to strengthen the government by allying it with the middle classes. The proposals of the Whigs were primarily aimed at increasing representation of the middle classes in the new industrial cities. Grey was very aware of the threat of revolution, so he believed reform would stop any possibility of this. As the Whigs were not against reform, and there was so much pressure for it, the Whigs introduced the Reform Bill in 1831, written by John Russell, and it was surprisingly radical. It proposed the following: * A lowering of the property qualification in order to extend the vote to about 300,000 new voters or about 18% of the adult male population. ...read more.

Conditions of the towns were still very bad, and new following reforms were not going to help the poor e.g. the Poor Law Amendment Act. The Act severely restricted the power the Crown had in influencing events at Westminster. Now, a ministry could now survive without the support of the Crowns and Lords but not without the support of the Commons. Perhaps the most important consequence of the 1832 Reform Act was that it prepared the way for further political, social and economic change. It wetted the appetite for new reforms such as the Municipal Corporations Act, the Marriage Act and the Factory Act. The Reform Act in 1832 came about because of huge amounts of pressure from the working class (swing riots, and National Union of Working Class), the middle classes (BPU), and the Radicals (Henry Hunt). They all wanted to stop corruption, and gain representation and the Whigs realised reform was necessary. However, although they passed the act in the end after objections from Tories, the act had a negative effect on the working class, and the middle classes only benefited slightly. It seemed like the Whigs were the ones who benefited most from the Act. However, it was a huge landmark, and the act did definitely set the scene for future reforms and gave the Whigs a taste for it. It was also the beginnings of a modern party organisation. ...read more.