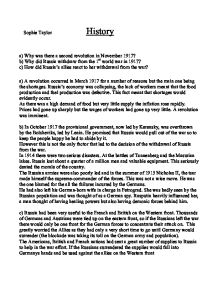 Why was there a second revolution in November 1917? Why did Russia withdraw from the 1st world war in 1917? How did Russia's allies react to her withdrawal from the war?

Sophie Taylor History a) Why was there a second revolution in November 1917? b) Why did Russia withdraw from the 1st world war in 1917? c) How did Russia's allies react to her withdrawal from the war? a) A revolution occurred in March 1917 for a number of reasons but the main one being the shortages. Russia's economy was collapsing, the lack of workers meant that the food production and fuel production was defective. This fact meant that shortages would evidently occur. ...read more.

However this is not the only factor that led to the decision of the withdrawal of Russia from the war. In 1914 there were two serious disasters. At the battles of Tannenberg and the Masurian lakes. Russia lost about a quarter of a million men and valuable equipment. This seriously dented the morale of the country. The Russian armies were also poorly led and in the summer of 1915 Nicholas II, the tsar made himself the supreme-commander of the forces. This was not a wise move. He was the one blamed for the all the failures incurred by the Germans. ...read more.

Thousands of Germans and Austrians were tied up on the eastern front, so if the Russians left the war there would only be one front for the German forces to concentrate their attack on. This greatly worried the Allies as they had only a very short time to go until Germany would surrender (the blockade was taking its toll on the German army and population). The Americans, British and French nations had sent a great number of supplies to Russia to help in the war effort. If the Russians surrendered the supplies would fall into Germanys hands and be used against the allies on the Western front ...read more.