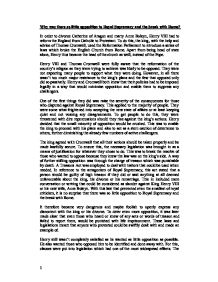 Why was there so little opposition to Royal Supremacy and the break with Rome?

Why was there so little opposition to Royal Supremacy and the break with Rome? In order to divorce Catherine of Aragon and marry Anne Boleyn, Henry VIII had to reform the England from Catholic to Protestant. To do this, the king, with the help and advice of Thomas Cromwell, used the Reformation Parliament to introduce a series of laws which broke the English Church from Rome. Apart from being head of state alone, Henry thus became the head of the church as well, instead of the Pope. Henry VIII and Thomas Cromwell were fully aware that the reformation of the country's religion as they were trying to achieve was likely to be opposed. They were not expecting many people to support what they were doing. However, in all there wasn't too much major resistance to the king's plans and the few that opposed only did so passively. Henry and Cromwell both knew that their policies had to be imposed legally in a way that would minimise opposition and enable them to suppress any challengers. ...read more.

A way of further stifling opposition was through the charge of treason which was punishable by death. A Treasons Act was employed to deal with traitors that could be used when needed. In reference to the antagonism of Royal Supremacy, this act stated that a person would be guilty of high treason if they did or said anything at all deemed unfavourable about the king, his divorce or his remarriage. This in included mere conversation or writing that could be considered as slander against King Henry VIII or his new wife, Anne Boleyn. With this law that prevented even the smallest of royal criticism, it is no surprise that there was so little opposition to Royal Supremacy and the break with Rome. It therefore became very dangerous and maybe foolish to openly express any discontent with the king or his divorce. To deter even more opposition, it was later made clear that even those who heard or knew of any acts or words of treason and failed to report them, would be punished with life imprisonment. ...read more.

The killings of two prominent figures in John Fisher and Sir Thomas More gave even more indication of the king's zero-tolerance of any opposition no matter whom it's from. In getting rid of these people, Henry not only showed the extent of his power but also used them as further examples. Because even well known people, like the Observant Franciscans and the Carthusians had lost their lives and freedom in opposing the king, it gave little hope to ordinary people that they could mount meaningful and successful opposition. In conclusion, there was so little opposition to Royal Supremacy and the break with Rome because the majority of people had already reacted with passive acceptance. This could have been down to a lack of strong Catholic devotion in the country at the time. Also, the king and Cromwell had taken serious measures into making sure that challengers were dealt with properly such as using legislation for treason and to execute traitors. Furthermore, it was unlikely for there to be major opposition because those who rose up against the king were uncompromisingly made examples of. ?? ?? ?? ?? 1 ...read more.