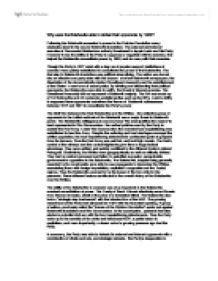 Why were the Bolsheviks able to defeat their opponents by 1922?

Why were the Bolsheviks able to defeat their opponents by 1922? Following the Bolshevik accession to power in the October Revolution many obstacles stood in the way to Bolshevik absolutism. The external and internal enemies of Communist Bolshevism actively threatened to topple Lenin and his Party. However it was the ability of the Party to suppress or negotiate with its enemies, that helped the Bolsheviks consolidate power by 1922, and do away with their enemies. Though the Party in 1917 ruled with a degree of popular support, institutions of coercion were quickly established to consolidate the power of the Bolsheviks. The first step to Bolshevik absolutism was political streamlining. ...read more.

The Bolsheviks willingness to use any force "the ends justifies the means" is best represented in War Communism- the radical policies used by the Party to sustain the Red Army. Under War Communism the resented food requisitioning was established to feed the Army. Despite the suffering and food shortages amongst the civilian population, the food requisitioning detachments confiscated grain at gunpoint from the farmers. Thus the Red Army was well fed, and had high morale. The Red's control of the railways and the central highlands gave them a huge tactical advantage. They were unified, and quickly mobilized to the different fronts to defend Petrograd. ...read more.

The growing resentment of the Party had climaxed bin 1921 with the Kronstadt uprising. A group of sailors, previously called the "heroes of the October Revolution" spoke out against Bolshevik absolutism and War Communism. In the countryside, peasants had also started a potential civil war with the food requisitioning detachments. Thus the Party woke up to the severity of the crisis and introduced NEP, a partial return to capitalism, and more importantly, a steam valve to growing pressure against the Party. In summary, the Party was able to defeats its external and internal opponents with a combination of divide and rule, and strategic retreats. The Party's desperation to survive the early years of government, and resolve and unity within the Party led it to its position of uncontested power in 1922. ...read more.