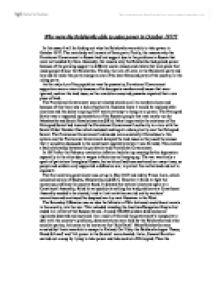 Why were the Bolsheviks able to seize power in October 1917? In this essay I will be finding out why the Bolsheviks were able to take power in October 1917. The main body will consist of three parts. Firstly, the reasons why the Provisional Government in Russia had lost support due to the problems in Russia that were not handled by them. Secondly, the reasons why the Bolsheviks had gained power because of the growing support in different social classes and events that took place that made people favour the Bolsheviks. Thirdly, the role of Lenin in the Bolshevik party and how did he make the party emerge as one of the least favoured party of the country, to the ruling party. As the majority of the population was the peasantry, Provisional Government supporters were a minority because of its bourgeois members and issues that were ignored, such as the land issue, as the revolution occurred peasants expected their own piece of land. The Provisional Government was not elected which as all its members knew and because of this there was a lack of authority. ...read more.

Around 400,000 soldiers died and some regiments deserted and mutinied. As a result of this and the government's incapacity to deal with the country's problems, demonstrations were held by the Bolsheviks and other socialist parties, this came to be known as the "July Days". Many Bolsheviks were arrested but Lenin was able to escape to Finland. On 3 July the Bolshevik slogan 'Peace, Bread & Land' and 'All power to the Soviets' were chanted. Later, General Kornilov carried out a coup by trying to take power and take control of Petrograd. Then the Provisional Government made a big mistake, by arming workers to stop the coup, but who ere left wing supporters. These events and the inability for the Provisional Government to help the country brought out the decline of it which gave more support towards the Petrograd Soviet which later helped the Bolsheviks. Throughout 1917 Lenin's party, the Bolsheviks had gradually grown and decided it was time for a full-scale revolution. The Bolsheviks had printed a special version of Pravda for the front line troops and ensured an end of war policy. ...read more.

Lenin was a very intellectual man who dominated discussion in the Bolshevik party with his annoying, but convincing language and way of talking. Most of the times he pursued unpopular policies but would eventually convince his comrades to accept his views. Lenin was the man who constructed the vital propaganda for the front line troops, speeches, April Theses, Pravda etc. which turned out to be one of the key factors for the Bolsheviks seizing power. He was known for being a paranoid person and it was not justified whether Trotsky accepted Lenin's views on the timing of the revolution, or vice-versa, or they compromised. By this we can see that Lenin's role in the party was vital for the Bolsheviks due to his intelligence and urge to make the Bolshevik party rulers of Russia. From this we can see various reasons as to why the Bolsheviks were able to seize power due to the fall of the Provisional Government, gain of support of the Bolsheviks and Lenin's role in the Bolshevik. These factors have been narrowed down to specifics including events and facts of Russian society at the time. By Kunal Gokal ...read more.