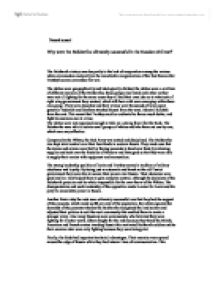 Why were the Bolsheviks ultimately successful in the Russian civil war?

Nawal amari Why were the Bolsheviks ultimately successful in the Russian civil war? The Bolshevik victory was due partly to the lack of cooperation among the various white commanders and partly to the remarkable reorganization of the Red forces after Trotsky became commissar for war. The whites were geographically and ideologically divided, the whites were a coalition of different enemies of the Bolsheviks; these groups also hated each other as they were not all fighting for the same cause they all had their own idea as to what sort of right wing government they wanted, which left them with wars emerging within there own group. They were disunited and their armies were thousands of miles apart, generals Yudenich and Deniken attacked Russia from the west, Admiral Kolchak from the east. ...read more.

They made sure that the towns and armies were fed, by forcing peasants to hand over food, by rationing supplies and took over the factories of Moscow and Petrograd so that they were able to supply their armies with equipment and ammunition. The strong leadership qualities of Lenin and Trotsky created a tradition of military obedience and loyalty. By being just as autocratic and harsh as the old Tsarist government they were able to secure their power over Russia. Their decisions were good and in a way helped them to gain complete control, although the decisions of the Bolshevik party can not be whole responsible for the over throw of the Whites. The disorganisation and weak leadership of the opposition made it easier for Lenin and his party to consolidate power in Russia. ...read more.

Finally, the Reds had important territorial advantages. Their enemies were spread around the edge of Russia while they had internal lines of communication. This enabled them to move troops quickly and effectively by rail, while their enemies used less efficient methods. The Bolsheviks had what they need to win the war. The British, French and American armies were fighting miles from home, at the end of a long supply line. The Bolsheviks on the other hand had control of the main cities of Moscow and Petrograd, control of the railways, an army of 300,000 men, very strict army discipline, internal lines of communication and the whites slogan: "A united and indivisible Russia" which alienated national minorities, and played into Bolshevik hands. As a result Lenin and Trotsky were able to have a revolution they had waited for, for so long. ...read more.