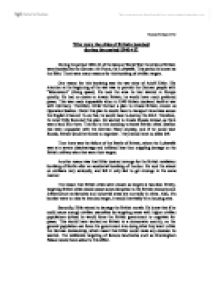 Why were the cities of Britain bombed during the period 1940-41?

Thomas Fordyce 11AJ Why were the cities of Britain bombed during the period 1940-41? During the period 1940-41 of the Second World War the cities of Britain were bombed by the German Air Force, the Luftwaffe. This period is known as the Blitz. There were many reasons for this bombing of civilian targets. One reason for this bombing was the war aims of Adolf Hitler. His intention at the beginning of the war was to provide the German people with "lebensraum" (living space). He took the area he had wanted in Europe quickly. He had no desire to invade Britain; he would have much preferred peace. ...read more.

Therefore, he never fully favoured this plan. He wanted to invade Russia instead, as there was a land link there. This led to him deciding to b**b British cities. Sealion had been unpopular with the German Navy anyway, and if he could take Russia, Britain would be forced to negotiate - they would have no allies left. Then there was the failure of the Battle of Britain, where the Luftwaffe was at a severe disadvantage and inflicted less then crippling damage on the British military sites that were their targets. ...read more.

Secondly, Hitler aimed to damage the British morale. He knew that if he could cause enough civilian casualties by targeting areas with higher civilian populations (cities) he would force the British government to negotiate for peace. This would have worked as Britain is a democratic country, so the general population can force the government into doing what they want unlike the German dictatorship, which meant that Hitler could make any decision he wanted. The deliberate targeting of famous landmarks such as Buckingham Palace would have added to this effect. In conclusion, Hitler's desire for revenge and expansion as well as the difficulty of actually invading Britain meant that he decided to target British cities. Word Count; 450 words ...read more.