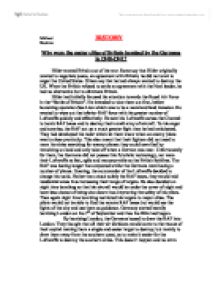 Why were the major cities of Britain bombed by the Germansin 1940-1941?

Mikhael HISTORY Boukraa Why were the major cities of Britain bombed by the Germans in 1940-1941? Hitler wanted Britain out of the war. Some say that Hitler originally wanted to negotiate peace, an agreement with Britain; he did not want to anger the United States. Others say that he had always wanted to destroy the UK. When the British refused to settle an agreement with the n**i leader, he had no alternative but to eliminate Britain. Hitler had initially focused his attention towards the Royal Air Force in the "Battle of Britain". He intended to take them out first, before launching operation Sea Lion which was to be a naval and land invasion. He wanted to wipe out the inferior RAF force with his greater number of Luftwaffe quickly and effectively. He sent his Luftwaffe across the Channel to b**b RAF bases and to destroy their small army of aircraft. To his anger and surprise, the RAF put up a much greater fight than he had anticipated. They had developed the radar which let them know when an enemy plane was in close proximity. ...read more.

They had been fighting since September 1939 and were tired. They were losing their men, their comrades, their brothers; this was their first set back. Hitler thought that bombing London might boost their morale and confidence. London was Britain's capital and the heart of the British Empire. The German pilots would be able to see the destruction they are inflicting on the enemy's most valuable and important cities, and feel like they were really doing something for their country. The bombing of London would also have a huge effect on the country's morale. The Germans hoped that aerial bombardment would lead to a breakdown in everyday life, with pressure brought to the government to make peace in order to avert anarchy. By bombing out food stores and warehouses, the Germans hoped to starve the British into submission. They also bombed the Dockland area. Britain was not a self sufficient country. All imports and exports were crucial. Huge amounts of merchant shipping passed through this area and attacking it would cause major disruption. Without the docks running properly it would be very hard to supply the country with the materials that it needed. ...read more.

The Germans did not only intend to take out the coastal cities but targeted all major industries, especially those manufacturing wartime materials. Coventry suffered a surprise Blitz on the 14th of November 1940. It was the biggest single raid on a city and its effects were devastating. Coventry was the centre for skilled engineering along with Bristol, had many armaments factories and was the centre for metals trades. Its factories produced machine tools and vehicles and it also had an aircraft factory. Southampton had important oil installations and a spitfire factory. Germany also tried to destroy Britain's second largest city Glasgow. It had shipping yards on the river Clyde, which would store many military and merchant vessels; it had iron and steel works and was a crucial naval trading point. Cities like Sheffield and Manchester were also targeted due to their steel and textile productions respectively. In conclusion, Germany needed to get rid of Britain as soon as possible before entering into Russia. She tried to eliminate British commerce and trade by bombing the cities, and destroying its industries so that when it came to it, her land forces would face little resistance when invading and occupying the country. Hitler thought Great Britain could not fight once its major cities had been taken out. ...read more.