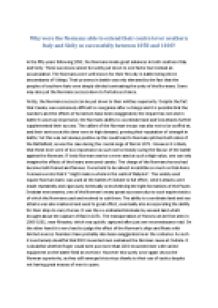 Why were the Normans able to extend their control over southern Italy and Sicily so successfully between 1050 and 1100?

Transfer-Encoding: chunked ﻿Why were the Normans able to extend their control over southern Italy and Sicily so successfully between 1050 and 1100? In the fifty years following 1050, the Normans made great advances in both southern Italy and Sicily. These successes cannot be solely put down to one factor but instead an accumulation. The Normans were well known for their ferocity in battle being direct descendants of Vikings. Their prowess in battle was only elevated by the fact that the peoples of southern Italy were deeply divided contrasting the unity of the Normans. Some may also put the Normans success down to fortuitous chance. Firstly, the Normans success can be put down to their military superiority. Despite the fact that Cavalry were extremely difficult to reorganise after a charge and it is possible that the numbers and the effects of horsemen have been exaggerated, the impact has not and in battle it was truly impressive, the Normans ability to coordinate land and Sea attacks further supplemented their success. The calibre of the Norman troops was also not to be scoffed at, and their services at this time were in high demand, proving their reputation of strength in battle. ...read more.

It was the co-ordinated blockade by sea and land which brought about the capture of Bari in 1071. The transportation of Horses can be first seen in 1060-1061, near Messina, which was quickly captured after just one reconnaissance raid. On the other hand it is very hard to judge the effect of the Norman?s ships and fleets with limited sources. Numbers have probably also been exaggerated over the centuries. As such it is extremely doubtful that 3000 mounted men sustained the Norman cause at Civitate. It is doubtful whether Roger could even put more than 1000 mounted men with varied equipment on the battle field at one time. However this surely once again shows the Norman superiority, as they still emerged victorious thanks to their use of tactics despite not having great masses of men to spare. Secondly, the Normans were able to extend control thanks to the disunity of opposing forces. The fortuitous death of the Emir of Italy in 1052 left three rival emirs. One of which, Ibn Timnah, actually formed an alliance with Roger and Robert Guiscard against a rival emir in Sicily. ...read more.

They were often Rivals in parallel to the relations between the southern Italians. Of course in this sense the Norman expansion of control over Italy could be put down to luck but opportunities need to be seized, and the long series of Norman victory during these decades in such spans of land cannot be explained by fortuitous chance. Finally, the Normans expansion was greatly helped by their relations with the papacy. The Normans relationship with the pope was mutually beneficial. The pope was the highest representative of God on earth and as such gave his blessings to the Normans. The pope also recognised Robert Guiscard as leader of Sicily whilst it was still under Muslim control. In conclusion the Normans were able to extend their control over southern Italy and Sicily so successfully due to the wide array of options they had when it came to pitched battles. Cavalry as well as land and sea coordinated attacks proved to be very effective in southern Italy. The Norman strength in Battle was further helped by the fact they rarely faced a unified enemy and even when they did, they were still overcame thanks to the power of the cavalry charge. ...read more.