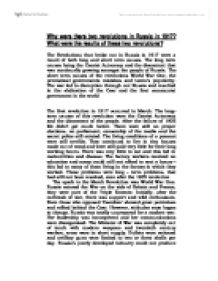 Why were there two revolutions in Russia in 1917? What were the results of these two revolutions? The Revolutions that broke out in Russia in 1917 were a result of both long and short term causes. The long term causes being the Czarist Autocracy and the discontent that was continually growing amongst the people of Russia. The short term causes of the revolutions World War One, the provisional governments mistakes and Lenin's popularity. The war led to disruption through out Russia and resulted in the abdication of the Czar and the first communist government in the world The first revolution in 1917 occurred in March. The long-term causes of this revolution were the Czarist Autocracy and the discontent of the people. After the failure of 1905 life didn't get much better. There were still no proper elections, no parliament, censorship of the media and the secret police still existed. The living conditions of a peasant were still terrible. They continued to live in tiny houses made out of wood and were still paid very little for their long working hours. There was very little to eat and this led to malnutrition and disease. The factory workers received no education and many could still not afford to rent a house - this led to many of them living in the factory in which they worked. ...read more.

Revolution looked very likely. The revolution began on March 8, 1917. It was a spontaneous uprising by the people directly due to food shortages and the lack of confidence in the government. It was not a planned uprising, organised by a political group, the people just took to the streets and demanded food and an end to the system of autocracy. Nicholas was unwilling to back down and ordered the Petrograd Garrison to shoot the strikers and demonstrators. On March 12 the soldiers refused to fire on the demonstrators and mutinied. Troops were sent from the Front to put down the disorder, but they never reached the capital because of a railway strike. Nicholas no longer had any authority in Petrograd. A simple bread riot had turned into a revolution. There was now, in effect, no government in Russia. The leaders of the Duma, who had been urging the Czar to form a more representative government, were alarmed at the prospect of a breakdown in law and order. They formed a Provisional Government, whose aim was to restore order until fee elections could be held to elect a free Russian Parliament. Prince Lvov, with Alexandor Kerensky as Minister for Justice, led the Provisional Government. Nicholas had no prestige or authority left and was advised to abdicate his throne and all his power. ...read more.