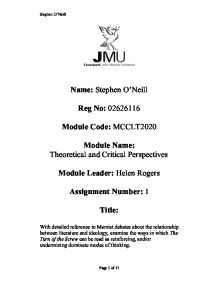 With detailed reference to Marxist debates about the relationship between literature and ideology, examine the ways in which The Turn of the Screw can be read as reinforcing, and/or undermining dominate modes of thinking.

Name: Stephen O'Neill Reg No: 02626116 Module Code: MCCLT2020 Module Name: Theoretical and Critical Perspectives Module Leader: Helen Rogers Assignment Number: 1 Title: With detailed reference to Marxist debates about the relationship between literature and ideology, examine the ways in which The Turn of the Screw can be read as reinforcing, and/or undermining dominate modes of thinking. Within this assignment, I intend on providing a detailed analysis of Henry James novel 'The Turn Of The Screw' in relation to Marxists debates over the relationship of 'Literature and Ideology'. Through this close analysis, I will be showing the main concepts of a Marxist perspective in relation to 'The Turn Of The Screw' and how this contributes in the creation of the notion of 'Literature and Ideology'. In order to achieve this, it is crucial to gain an understanding of the notion of 'Literature and Ideology'. In order to gain an appreciation of the term of Ideology, it would be important to consider the work conducted by Terry Eagleton1, this can be achieved through the statement that "Ideology provides lucid accounts of major Marxist thinkers, and examines the thought of non-Marxist theorists such as Schopenhauer, Nietzasche, Frued and the poststructulists2. ...read more.

it is clearly demonstrating the concept of 'Interpellation', as it is showing the collective representation of the working class community within the house of Bly and also a clear distinction between themselves and the Master. In relation to the question, it is therefore possible to argue that it is disregarding the notion of Marxism. However, it is a clear demonstration of Ideology and therefore it is possible to suggest that through the medium of literature, authors such as Henry James are able to express different interpretations and therefore it is possible to argue that literature on a whole is means to show ideological expression. Another important argument provided by Althusser was the meaning of words, which he suggested that words do not reflect the world, but produces a perception of it. From this, it is possible to argue that term of 'Interpellation' is another way of viewing the world. In relation to Henry James novel, 'The Turn Of The Screw', it is possible to argue that through the relationship that exists between Miles and the Governess, Henry James is demonstrating the notion of 'Interpellation', this is evident within the quotation of: "I pressed again, of course, the closer for that. "You are reminded that Quint was only a base menial?13." ...read more.