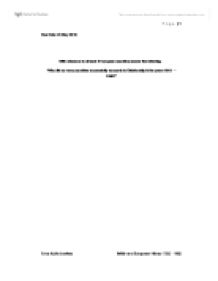 With reference to at least 2 European countries answer the following: Why did so many countries successfully succumb to Dictatorship in the years 1919 1939?

With reference to at least 2 European countries answer the following:

“Why did so many countries successfully succumb to Dictatorship in the years 1919 – 1939?”

The contemporary usage refers to a dictatorship as being, an autocratic form of absolute rule by leadership, unrestricted by law, constitutions, or other social and political factors within the state. The use of the term dictatorship isn’t a modern concept. During the period of the Roman Republic, individual dictators such as Sulla and Julius Ceaser were sometimes given these ‘exceptional’ powers by the Senate to effectively deal with an emergency.  As for a modern dictatorship, the key ingredient relies on power and emergency of a different kind. Early dictatorships included, Lenin’s Bolshevik regime in Russia, and a similar movement later attempted by Hungary’s Bela Kun. In fact it wasn’t until 1922 that Benito Mussolini set the pattern for a number of other leaders by assuming control of Italy. Eleven years later Adolf Hitler was appointed Chancellor in Germany with an even more ruthless regime. Between the wars there were 28 states in Europe. By the end of 1938 no fewer than 16 of these had become dictatorships.

The Treaty of Versailles was a peace settlement signed after World War I with the main aim of ‘making Germany pay’ for its crimes. This saw the creation of the League of Nations with its primary aim being to prevent war through collective security. Germany also had to except responsibility for starting the war that had left Europe devastated. With the rise of communism in Russia, the fears of this spreading to Western Europe had left the ‘big three’ (Britain, France and America) negotiating the extent of Germany’s punishment. Lloyd George believed that the rise of communism posed a far greater threat then a defeated Germany. George Clemenceau believed that Germany should be ‘brought to its knees’, to stop her starting war ever again. Woodrow Wilson agreed that Germany should be punished but in a way that would lead to European reconciliation and not revenge. In 1919, America’s decision not to join the League of Nations had ultimately left Britain and France without a backup. In pursuit to make Germany pay its debts for starting World War I, saw the rise of the fascism in politics.

During the 20th century, many nations including Russia, Germany and China, lived under extraordinarily brutal and oppressive governments. In 1929 the Wall Street crash caused the Great Depression and as unemployment soared, the political system started to veer towards extremism. In Europe, countries still struggling to recover from World War I are hit hard by the Depression.

Italy had been promised extensive territorial gains in the Secret Treaty of London in 1915, if they joined the entente powers rather than fulfilling its commitment to Germany. However this did not materialize and is now seen as the mutilated victory for Italy. After World War I, new ideas promoted by Benito Mussolini led to drastic change within the Italian government. The fascist ideology spread by Mussolini’s National Fascist Party saw the rise of his party. Mussolini wanted to build a great, glorious Italian Empire.

The democracy in Italy was under fire, and in 1922 saw Mussolini gain position of Prime Minister in Italy after his infamous March on Rome. This began the reign of fascism within Italy, with a new style of politics and leadership. By 1924, Mussolini had moved towards a dictatorship under influence and threat from people within his own party. Mussolini, not satisfied merely with political control, geared towards totalitarianism.

“The Wall Street Crash of 1929 and the subsequent onset of the world depression had the effect of nudging the Fascist regime along paths which, it is probably fair to say, many of its leaders in any case found perfectly congenial.” (Blinkhorn, 2006, p.46)

Mussolini wanted to make Italy a strong military power and looked to invade Ethiopia. The leader of Ethiopia looked to the League of Nations to take action against Italy’s aggression, but the league took no real action as they were unwilling to risk another world war. Ultimately using treats, violence and political skill, Mussolini outlawed any opposition as he become dictator of a totalitarianism regime.

Germany also underwent great changes after World War I. Like Mussolini and Stalin, Adolf Hitler rose to power during a time of conflict and political instability. After World War I Germany formed a new republican government, Weimer Republic which was extremely unpopular and was blamed for Germany’s economic problems. National conditions saw the rise of right-wing extremism from 1919, with the Treaty of Versailles and economic problems seeing Germany close to collapse. Hitler joined the National Socialist German Workers’ Party (NSDAP), resigning from the army and going into politics soon becoming a well known figure in the Munich beer halls. By 1921 Hitler had become the leader on the ‘NSDAP’ and formed the Storm-Abteilung (SA), a brilliant speaker, he had an influence on many people. Kurt Ludecke describing Hitler’s influence at one of his speeches:

“My critical faculty was swept away. Leaning from the rostrum as if he was trying to impel his inner self into the consciousness of all these thousands, he was holding the masses, and me with them, under an hypnotic spell by the sheer force of his conviction... I forgot everything but the man; then glancing around, I saw that his magnetism was holding these thousands as one.” (Farmer, 2000, p. 145)

Using propaganda, Hitler’s party became more popular in Germany. The economic difficulties caused unrest within Germany and the country was looking for strong, decisive leadership. By 1933 the Nazi’s were in power and the ‘Enabling Act’ allowed the Nazi’s to pass laws without the Reichstag’s consent. Between the periods of June-July 1933 other parties dissolved themselves, allowing Germany to officially become a one-party Nazi state.

A social revolution within Germany between 1933-1939 saw Hitler set up the ‘Four Year Plan’ in 1936, which had one main aim, to prepare Germany for war. Developing synthetic substitutes ultimately meant that Germany could be self-sufficient in raw materials by 1939. An article by Matthews (1938, p.10) shows Hitler’s reputation and the success of the ‘Four Year Plan’,

“To these achievements must perhaps be added to the pride of many Germans in the technical achievements of the Four Year Plan. Hitler won from many people the reputation of a ‘wizard’ when he succeeded in finding work for all but a fraction of the five-and-a-half million unemployed.”

Countries seek strong leadership to protect them from social and political change. Ultimately the failure of the League of Nations and the economic collapse caused by the Great Depression paved the way for the rise of dictatorships, such as Mussolini’s Italy and Hitler’s Germany.  The League of Nations failed to meet its primary goal which was to avoid any future World War. The fear of communism and war had left Europe’s major powers indecisive with crucial decisions, and without the backing of America, the potential outcome was ultimately inevitable, the people of many European states looked to dictators.