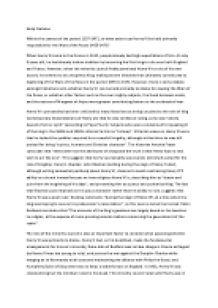 ﻿Emily Carleton Within the context of the period 1337-1471, to what extent can Henry VI be held primarily responsible for the Wars of the Roses 1455-1471? When Henry VI came to the throne in 1431, people already had high expectations of him. At only 8 years old, he had already broken tradition by becoming the first king to rule over both England and France. However, when the minority council finally permitted Henry VI to rule of his own accord, he seemed to be a hopeless King, making severe mistakes that ultimately contributed to beginning of the Wars of the Roses in the period 1455 to 1471. However, there is some debate amongst historians as to whether Henry VI can be held primarily to blame for causing the Wars of the Roses, or whether other factors such as the over mighty subjects, the feuds between noble, and the actions of Margaret of Anjou were greater contributing factors to the outbreak of war. Henry VI?s personality has been criticised by many historians as being unsuited to the role of king. Contemporary interpretations of Henry are that he was terrible at ruling, as he was ?utterly devoid of wit or spirit? (according to Pope Pius II). Subjects who were condemned for speaking ill of the king in the 1440s and 1450s referred to him as ?a sheep?. Victorian views on Henry VI were that he lacked the qualities required for successful kingship, although at that time he was still praised for being ?a pious, humane and Christian character?. The historian Antonia Fraser concludes that ?these were not the attributes of a king and the truth is that Henry had no real wish to act like one?. This suggests that henry?s personality was overall, entirely ill-suited for the role of kingship. Henry?s chaplain John Blacman (writing during the reign of Henry Tudor), although writing somewhat positively about Henry VI, chooses to avoid mentioning Henry VI?S ability to rule and instead focuses on how religious Henry VI is, ...read more.

However, there are other factors that suggest that he wasn?t entirely to blame for the Wars of the Roses. Many historians have identified the family tree of Edward III as a significant factor in causing the wars of the roses for several reasons. One main reason why it could be seen as a significant factor is because it started the debate as to who had the stronger claim to the throne, the house of Lancaster, or the house of York. When Edward II died in 1377, Richard II succeeded him (as Edward the black prince had predeceased his father). However, as she was too young to rule, John of Gaunt ruled in his stead until Richard II turned 20. Richard II banished Gaunt?s heir, Henry Bolingbroke, and Thomas Mobray when they had a quarrel, but made the fatal mistake of seizing all of the wealth of the house of Lancaster. This caused Henry Bolingbroke to return to reclaim his wealth, ultimately ending in Bolingbroke taking the throne of England as Henry IV. By doing so, he ignored the claims of the Mortimer family, which followed back through a woman named Philippa, the daughter of Lionel of Clarence (the second son of Edward iii), and these claims eventually passed down to Richard, duke of York. The Yorkist line seemed to have the stronger claim to the throne than the Lancastrian line, as Richard, earl of Cambridge?s marriage with Anne Mortimer connected his line with the Mortimer line, arguably putting him ahead of the Lancastrians in the line of succession. The debate was that Anne Mortimer was a woman, making Richard Plantagenet?s claim through a female line, so the Lancastrian claim was considered stronger, and also the Yorkist claim was not pursued after 1415, as his father, Richard, earl of Cambridge had been beheaded for treason. This chain of events helped to start off the Wars of the Roses, as it was Richard Plantagenet who founded the house of York. ...read more.

The Coventry Parliament in 1459 even wrote a catalogue of his alleged treacheries, and the tract Somnium Vigilantes criticised his behaviour as being ?subversive to the commonwealth?. The events in 1452 also support this view; York started a campaign to remove Somerset from power which failed, so he had to resort to an armed force. He also confronted the king at Blackheath with armed retainers, with a view to finally gaining his deserved position beside the king. According to the historian J.R. Lander, one contemporary writer claims that he ?surrendered on the promise that Somerset would be arrested?. However, this failed, as little support from nobles and the common people led to his humiliation. These events suggest that York was indeed ambitious and self-interested with little support. When York returned from Ireland in 1450, many of the king?s servants became suspicious. Despite returning because he was worried about the return of Somerset from France, the king?s servants assumed he was there to overthrow the king due to rumours spread about during that time. This suggests that he certainly did not have the approval of the public, as they were prepared to believe in rumours rather than trusting in his character. Overall, the balance of evidence seems to suggest that Henry VI was primarily responsible for the Wars of the Roses. Henry VI?s incompetence allowed rebellion to take place, and his inability to rule effectively meant that the government was filled with over-mighty subjects all vying for power. He also worsened the disputes between the nobles and increased tensions between them, creating the perfect conditions for war to take place. Although he cannot be blamed substantially for the defeat in France, he did play a role in events by surrendering Maine and Anjou. The usurpation in 1399 also heightened all of these factors, as it encouraged the belief that God was against his rule. None of the key factors responsible for the Wars of the Roses would have been as influential on events if Henry VI had been the dominant, assertive ruler everyone needed him to be. ...read more.