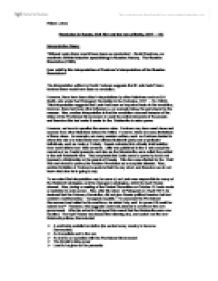 Revolution in Russia, Civil War and the rule of Stalin, (1917 - 41) Interpretation Essay 'Without Lenin there would have been no revolution'. David Footman, an academic British historian specialising in Russian history. The Russian Revolution (1962). How valid is this interpretation of Footman's interpretation of the Russian Revolution? The interpretation written by David Footman suggests that if Lenin hadn't been involved there would have been no revolution. However, there have been other interpretations by other historians such as S.A. Smith, who wrote Red Petrograd: Revolution in the Factories, 1917 - 18, (1983). This interpretation suggests that Lenin had been an important factor in the revolution, however, there had been other influences, an example being, the part played by the masses. Also, another interpretation is that the revolution occurred because of the failure of the Provisional Government, to meet the radical demands of the people, and therefore this had made it easier for the Bolsheviks to seize power. However, we have to question the source value. Footman may have used views and sources from other historians before the 1960s. However, there are many limitations of these views. An example, are many western writers, such as Footman tended to stress the role of a determined and ruthless Bolshevik party and of particular individuals, such as Lenin or Trotsky. ...read more.

During eight months this number increased by about 15,000. This transformed the party into a mass workers' party. The main tool that Lenin and the Bolshevik party used was propaganda and one of their main slogans was 'Peace, Bread and Land' This slogan demonstrated the way in which the Bolsheviks were able to combine the demands of the workers, soldiers and peasants to maximise their appeal. He argued that the Bolsheviks were to transfer power to the workers. This was reaffirmation of Lenin's basic belief that only the Bolshevik Party represented the forces of proletarian revolution. Above all Lenin was responsible for the timing of the revolution. He realised that July was too early to seize power, however, by September he felt that the timing was finally right to be able to take power 'from the gutter' as Lenin later stated. Lenin had tremendous prestige within the Bolshevik party had a great gift for combining theory and practice. Trotsky described him as the 'greatest engine-driver of the revolution.' This quote suggests that Lenin was behind the revolution, also suggested by Footman. Lenin's instance on a small elite organisation actually helped the Bolsheviks as his supporters were loyal and therefore secrecy was maintained. ...read more.

They were also successful as no other parties challenged the Bolsheviks and also no other party could do what they did. It could be said that Lenin did not devise the Bolshevik policies but their supporters, as Lenin responded to their demands. Their actions influenced him to take a more radical approach in 1917 and to make a decision in October that the time was right for a second revolution In my opinion, Lenin was a major factor in the revolution, which resulted in the Bolshevik seizure of power. I believe this because he was the main influence behind all the strategies and who wanted to overthrow the Provisional Government. If Lenin had not devised the parties' new policies, would the Bolsheviks have taken power? Also Lenin was the person to raise public awareness of the party, and managed to increase the membership from 10,000 to 25,000 in a space of 8 months. However, there are other factors involved in the revolution, for example, the part played by the masses was important as without their support the Bolsheviks could not have taken power, because before 1917 they were a relatively small party. Also, Lenin was not in Russia for most of 1917, and when he did return he confined himself to Petrograd. If it wasn't for the unpopularity of the Provisional Government there might have been no revolution. Rhiann Johns ...read more.