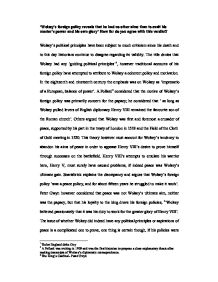 'Wolsey's foreign policy reveals that he had no other aims than to exalt his master's power and his own glory' How far do you agree with this verdict?

'Wolsey's foreign policy reveals that he had no other aims than to exalt his master's power and his own glory' How far do you agree with this verdict? Wolsey's political principles have been subject to much criticism since his death and to this day historians continue to disagree regarding its validity. The title denies that Wolsey had any 'guiding political principles'1, however traditional accounts of his foreign policy have attempted to attribute to Wolsey a coherent policy and motivation. In the eighteenth and nineteenth century the emphasis was on Wolsey as 'impresario of a European, balance of power'. A.Pollard2 considered that the motive of Wolsey's foreign policy was primarily concern for the papacy; he considered that ' as long as Wolsey pulled levers of English diplomacy Henry VIII remained the favourite son of the Roman church'. Others argued that Wolsey was first and foremost a crusader of peace, supported by his part in the treaty of London in 1518 and the Field of the Cloth of Gold meeting in 1520. This theory however must account for Wolsey's tendency to abandon his aims of peace in order to appease Henry VIII's desire to prove himself through successes on the battlefield. ...read more.

Later 'revisionists' took this idea and came to the conclusion that the England's success between 1514 were largely due to Wolsey, and its failures to Henry VIII. However it is unlikely that Wolsey's quest for peace drove Wolsey's diplomacy in 1523 when, unlike a more sceptical Henry VIII, he not merely 'endorsed plans for invasion and partition of France, but he did so with genuine enthusiasm'8. Wolsey's later triumph is surely inconsistent with his supposed Christian humanist pacifism. Finally his vigorous demands for the 'amicable grant' could only have been because he agreed with Henry that the partition of France was finally within England's grasp following Charles V's victory at Pavia. From these discrepancies historians such as John Guy have concluded that Wolsey's foreign policy was 'pragmatic and opportunist: designed to win power and glory for henry VIII whether in war or peace'9. In Renaissance diplomacy, reputation and the security of the land were arguably most important. Essentially Wolsey's task regarding his foreign policies was to fulfil through whatever means, Henry VIII's desire to make England great again and be a real rival to Charles V and Francis I. ...read more.

The people of England however were unlikely to be impressed with this side of Wolsey's diplomacy, since to them it was mainly about vanity, but in this matter Wolsey was Henry's servant. The King's expectations on Wolsey's foreign policy were 'unrealistic, even absurd. His task was to do the impossible. That he did so for over a decade is a tribute to his Tran formative genius11. I do agree with the verdict that 'Wolsey's foreign policy reveals that he had no other aims than to exalt his master's power and his own glory'. The reason that there is such difficulty for Historians to discover Wolsey's guiding political principles is because he had none. His policies although her did undoubtedly prefer peace were manoeuvred according to the whims of Henry VIII, and 'by this means bring honour to is master- and of course, to himself'12. Michelle Eskinazi 1 Tudor England-John Guy 2 A Pollard was writing in 1929 and was the first historian to propose a clear explanatory thesis after reading transcripts of Wolsey's diplomatic correspondence. 3 The King's Cardinal- Peter Gwyn 4 Henry VIII- J.Scarsbrick 5 Henry VIII- J.Scarsbrick 6 Cardinal Wolsey- John Guy 7 Henry VIII- J.Scarsbrick 8 Tudor England- John Guy 9 Tudor England- John Guy 10 Tudor England- John Guy 11 Tudor England- John Guy 12 The King's Cardinal- Peter Gwyn ...read more.

This essay has a really good clear style and confident tone. The student demonstrates good knowledge of the period which is used confidently to support and develop the judgements. There is also good us of a range of historians views. At time these are used to illustrate and it would be even better if the views of the historians were used too.