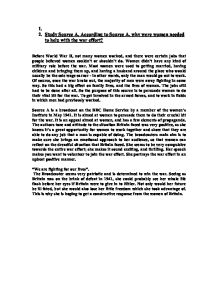 1. 2. Study Source A. According to Source A, why were women needed to help with the war effort? Before World War II, not many women worked, and there were certain jobs that people believed women couldn't or shouldn't do. Women didn't have any kind of military role before the war. Most women were used to getting married, having children and bringing them up, and having a husband around the place who would usually be the sole wage earner - in other words, only the man would go out to work. Of course, once the war broke out, the majority of men were away fighting in some way. So this had a big effect on family lives, and the lives of women. The jobs still had to be done after all. So the purpose of this source is to persuade women to do their vital bit for the war. To get involved in the armed forces, and to work in fields in which men had previously worked. Source A is a broadcast on the BBC Home Service by a member of the women's Institute in May 1941. It is aimed at women to persuade them to do their crucial bit for the war. It is an appeal aimed at women, and has a few elements of propaganda. The authors tone and attitude to the situation Britain faced was very positive, as she knows it's a great opportunity for women to work together and show that they are able to do any job that a man is capable of doing. The broadcasters main aim is to make sure she brings an emotional approach to her audience, so that women can reflect on the dreadful situation that Britain faced. She seems to be very compulsive towards the entire war effort; she makes it sound exciting, and thrilling. Her speech makes you want to volunteer to join the war effort. She portrays the war effort in an upbeat positive manner. "We are fighting for our lives". ...read more.

Furthermore, the list plan shows that potatoes should be cooked everyday except Friday and Saturday's. This suggest that the amount of potatoes which were imported were of a very high number, and that farmer and people had been growing a wholesome amount in their back gardens. The government produced a lot of food and cooking leaflets during the war because it was beginning to run out of supply. The n**i's had gained so much control over Europe that Britain had to get its supplies from USA. This was usually a much longer journey, and Britain had to wait ages until ships reached the docks. The governments aim was to make sure women used each item of food wisely, and saved as much food as they possibly could. They tried to convince women to grow their own vegetables, as food was a weapon of war. But in the whole, rationing was a very clever way of distributing food in the country. 5. Study sources G and H. How useful are these sources as evidence about the role of women at work during the war? Source G is a popular song during the Second World War, which was probably sung by women in factories to boost their morale's. It perhaps helped them to keep up with work, and to make them realise that everybody was on the same boat. The source isn't very reliable, as we don't know when it was written or who wrote it. Therefore anybody could have written this song, whether he/she was anti-war or pro-war. But what we can learn from this source is that many women had s****t attitudes. It is only a song about women. I think that the amount of propaganda the government produced, indoctrinated all the women into thinking that it was ONLY they who helped win the war, when in fact men also did play a vital part in the Second World War. ...read more.

Working life in the home seemed very hectic for the average woman. Working in the home was just as hard as working in any factory, just as source H suggests. For some women, war work brought greater independence, the opportunity to train for skilled jobs and take pride in what they did. Source B suggests that war can bring a brighter future for women by asking for respect, independence and more freedom in return. Women wouldn't have been able to gain all this if they hadn't conscripted or volunteered into the work force. Out of war work, women achieved a lot of dignity, a changing role and a better future, not only for them, but for their children too. They played an important part in the work force too. It boost their confidence and self-conscious. Some women enjoyed working in the work force. Source G is a popular song that was probably sung by a lot of women in the work force. The song implies that women used to sing to keep up morale's and that they were really determined to win the war. It also implies that the atmosphere at work used to be fun and merry. War work and kitchen work were inter-dependant. Both jobs, in and out of the home were vital to keep the country running. Jobs were of the same importance, they were both very hard to keep up with, but working in the factory and not working at home would be impossible. There would always be a little bit of cooking and cleaning to do at home. Working in the civil defence, or the armed forced was just as hard as struggling to feed and clothe your family. Without any income, a family cannot survive. Women had no choice but to work. Not only were they working for their children's health and safety, they were also helping out in the war effort at the same time. Women were of high importance in whatever they did. Their contribution to everything helped Britain win the war! ...read more.