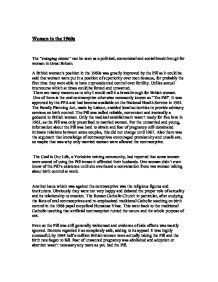 Women in the 1960s The "swinging sixties" can be seen as a political, economical and social breakthrough for women in Great Britain. A British woman's position in the 1960s was greatly improved by the Pill as it could be said that women were put in a position of superiority over men because, for probably the first time they were able to have unprecedented control over fertility. Unlike sexual intercourse which at times could be forced and unwanted. There are many reasons as to why I would call it a breakthrough for British women. One of them is the oral contraceptive otherwise commonly known as "The Pill". It was approved by the FPA and had become available on the National Health Service in 1961. The Family Planning Act, made by Labour, enabled local authorities to provide advisory services on birth control. The Pill was called reliable, convenient and ironically a godsend to British women. Only the medical establishment wasn't ready for free love in 1961, as the Pill was only prescribed to married women. For the unmarried and young, information about the Pill was hard to obtain and fear of pregnancy still dominated intimate relations between some couples, this did not change until 1967. Also there was the argument that knowledge of contraceptives encouraged promiscuity and unsafe sex, so maybe that was why only married woman were allowed the contraceptive. ...read more.

This did not mean they were completely classless. Not only did inequality persist, Barbara Marsh, who came to Britain in 1962 in Jamaica, watched the barriers of the both class and race in England. She worked in Midlands, in factories, doing light-engineering work first, and then when she was starting a family she moved to London. "Office people would come in the office and see you and never say "Good Morning" to you because you were the cleaner...they think they are nice and you are only the cleaner". When it came to race, there was little pretence even of equality. Racism was accelerating for there were too many immigrants too ignore. Politically, women were allowed to become an MP and take a role in government. Labour's Harold Wilson (1964) encouraged to work with and promoted women in his government. Jennie Lee, Shirley Williams, Judith Hart and Margaret Herbison were all prominent in his Labour. Barbara Castle was making policies reality as a Cabinet Minister for Overseas Development. Her belief was that "it is hard for anyone, male or female, to fulfil themselves if they are poor, ill-housed, ill-educated and struggling with ill-health". Barbara's approach, consequently, was to tackle women' needs as part of general social issues. Labour did not make a complete break with Tory policy, for they had been clearing slums and building hospitals too. ...read more.

Married women were going to be the means of expansion. Families became smaller and it was easier for women to work longer. Although more and more women were going out to work, there were questions around the types of employment made available for them. Nurseries were being discussed along with the campaign of cervical-cancer screening. In the summer of 1968, the strike of Ford's sewing machinists put equality on the agenda. They struck for the right to be included in a higher paid grade which was all male, challenging Ford's system. Even though the Ford sewing machinists did not win their demand to be graded equally but they did get a rise. Their strike was politically sensitive, as Labour was trying to impose an incomes policy. A quotation from Audrey Wise "Everybody thought of cars as being about the track, about engines, and metal, and here you had women working with soft materials, sewing, and they could stop a huge car factory...Women are not used to feeling powerful, so it had a very great effect on them." To conclude, I believe that women as a whole have struggled to reach their positions and roles in the world today. The pill was a leg up in society for women as it gave them an opinion and a voice in social, economic and political issues. The controversial introduction of the Oral Contraceptive into Great Britain, in the 1960s, had made women more exposed than ever whether they wanted the exposure or not. ...read more.