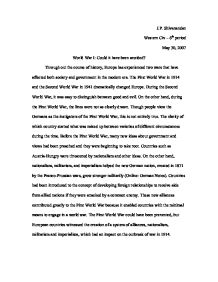 World War I: Could it have been avoided?

J.P. Shivanandan Western Civ - 6th period May 30, 2007 World War I: Could it have been avoided? Through out the course of history, Europe has experienced two wars that have affected both society and government in the modern era. The First World War in 1914 and the Second World War in 1941 dramatically changed Europe. During the Second World War, it was easy to distinguish between good and evil. On the other hand, during the First World War, the lines were not as clearly drawn. Though people view the Germans as the instigators of the First World War, this is not entirely true. The clarity of which country started what was mixed up between varieties of different circumstances during the time. Before the First World War, many new ideas about government and views had been preached and they were beginning to take root. Countries such as Austria-Hungry were threatened by nationalism and other ideas. On the other hand, nationalism, militarism, and imperialism helped the new German nation, created in 1871 by the Franco-Prussian wars, grow stronger militarily (Online: German Notes). Countries had been introduced to the concept of developing foreign relationships to receive aide from allied nations if they were attacked by a common enemy. ...read more.

Once Germany had entered the war, the people felt "that they belonged together," and it was "what they should have felt in peace time" (Zweig, 277). Nationalism helped unify the people and make them feel like a team instead of an individual during the war. Unlike Germany, the Austria-Hungry Empire was threatened by the growth of nationalism in small groups and attempted to repress the threat. With its diverse cultural of Czechs, Slovaks, Serbs, Croats, Romanians, and more, Austria-Hungry faced difficulties satisfying the citizen's needs and containing the nationalist minorities because of the diversity (Online: The Corner, "Nationalism"). Serbia only heightened this problem by attempting to unite the minorities in Austria and overthrow the Austrian government (Perry, 511). Once Gavrilo Princip, a member of a Serbian nationalist group called the Black Hand, assassinated Archduke Francis Ferdinand, who was next in line for the throne, on June 28, 1914, Austria was unable to ignore this nuisance anymore (Simkins, 22). On July 23, 1914, Austria presented an ultimatum to Serbia who agreed to all but one of the demands. Nevertheless, Austria still declared war on Serbia (Perry, 511). Nationalism contributed to the First World War because it unified the people of the new German nation but, attempted to destroy the Austria-Hungry Empire in Europe. ...read more.

If the alliance system, nationalism, militarism and imperialism had not been used, then Europe may not have experienced the First World War. The alliance system had brought about the war because it obliged countries to enter into the fight. The alliances between the powerful nations divided Europe in two; the people on the Triple Alliance and those on the Triple Entente. Similarly, nationalism helped accelerate the war because it encouraged countries to fight for their nation. Also, nationalism threatened empires such as Austria-Hungry because of the diverse interests and the country could not satisfy the needs of all the different people. Militarism also had an impact on the First World War because of the powerful armies and the production of new weapons, such as rifles and tanks. It gave power to the generals, who thought the solution to everything was using force. Finally, imperialism influenced the war because Germany needed to spread its culture and obtain the supplies necessary for them to maintain their army and navy. Alliances, nationalism, and militarism all contributed to the start of the First World War and if these developments in society had been avoided, there may not have been history of the horrific events of the First World War. ...read more.