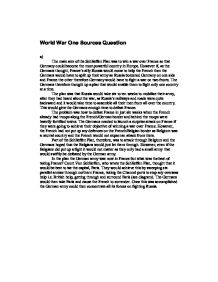 World War One Sources Question a) The main aim of the Schlieffen Plan was to win a war over France so that Germany could become the most powerful country in Europe. However if, as the Germans thought, France's ally Russia would come to help the French then the Germans would have to split up their army as Russia bordered Germany on one side and France the other therefore Germany would have to fight a war on two fronts. The Germans therefore thought up a plan that would enable them to fight only one country at a time. The plan was that Russia would take six to ten weeks to mobilise their army, after they had heard about the war, as Russia's railways and roads were quite backward and it would take time to assemble all their men from all over the country. This would give the Germans enough time to defeat France. The problem was how to defeat France in just six weeks when the French already had troops along the French/German border and behind the troops were heavily fortified towns. The Germans needed to launch a surprise attack on France if they were going to achieve their objective of winning a war over France. ...read more.

c) New technology had to be brought into action in World War 1 as each side wanted a victory and therefore needed good weapons. The tank was first used in World War 1, however, the idea was not new it just had not been taken seriously by army experts. Tanks were useful in ending the stalemate because they could help the infantry break into enemy lines. Also when tanks were first used in World War 1 they shocked the Germans and they terrified some of the front line troops. Tanks are best remembered for their attack on Cambrai in November 1917 where they managed to create a hole ten kilometres wide and six metres deep through the German lines. However tanks were unreliable and often broke down during battle, some run out of petrol and others were damaged by artillery fire, and were not a safe place to be in. They were also very slow, at the beginning they were not even as fast as walking pace (2 mph on the road, 1/2 mph cross country) and by the end of the war they were slightly faster (4mph) but they still could not move quickly or with much ease. ...read more.

Therefore the offensive must have had some part to play in the ending of stalemate. All of the above points were important in breaking the stalemate on the Western Front. However I think that the new technology used was less pivotal than the rest because although the technology was important the tank was hardly ever used and was unreliable and gas also was not used a lot so did not help in ending the stalemate. I cannot say that one point is the most important as they are all linked together. For example if the Allies had not blockaded the German ports then the Ludendorff Offensive might have never happened because the Germans might have stayed in a defensive position and not attack as there was no reason to. However when food riots did happen they needed to attack so that they could win and get the ports unblocked. Another example of how they are linked is that if the Americans had not entered the war then the Germans might have won the Ludendorff offensive as they outnumbered the Allies without the Americans and not have had low morale and have been tired of fighting. Overall I think that the statement is correct in saying that they are all equally important in finally breaking stalemate on the Western Front. 1 ...read more.

**/***
The essay has some valid points, and knowledge and understanding of the relevant content is good. The answer would benefit from better organisation (factor-led) and an avoidance of the tendency to write short, brief paragraphs with narrative. It is important to demonstrate a level of thinking and the answer would benefit from more explicit links to the question.