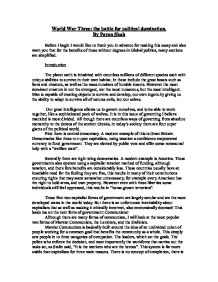 World War Three: the battle for political domination. By Pavan Shah Before I begin I would like to thank you in advance for reading this essay and also warn you that for the benefits of those without degrees in Global politics, many sections are simplified. Introduction The planet earth is inhabited with countless millions of different species each with unique abilities to survive in their own habitat. In these include the great beasts such as lions and cheaters, as well as the mass numbers of humble insects. However the most dominant creature in not the strongest, nor the most numerous, but the most intelligent. Man is capable of creating objects to survive and develop, our own ingenuity giving us the ability to adapt to survive all of natures evils, but our selves. Our great intelligence allows us to govern ourselves, and to be able to work together, like a sophisticated pack of wolves. It is in this issue of governing I believe mankind is most divided. All though there are countless ways of governing from absolute monarchy to the demos of the ancient Greeks, in today's society there are four super giants of the political world. First there is central democracy. A modern example of this is Great Britain. Democracies like these run upon capitalism, using taxation a confidence-empowered currency to fund government. They are elected by public vote and offer some communal help with a "welfare state". ...read more.

First we must look at how communism evolved from being rebellious minority parties in Europe to a great power in Russia and later China. Towards the end of the First World War in 1916, the eastern front was crumbling under the Tsar government. The lack of food and high losses due to war brought about revolution, both on the left of the political scale. There were two leading parties, the socialist revolutionists, who's concerns were simply to feed the people of Russia, and the Bolsheviks, fronted by Lenin, who wanted similarly to feed Russia, exit the war and introduce a Marxist Communist system. Lenin took power over from the Tsar, and intended to set up a democratic government as Marx envisioned, but the resulting government was divided and week and as a result was dissolved after 24 hours. A treaty with Germany was quickly formed, in which the motherland lost 70% of her farmland. Despite this the agricultural system managed to survive through collective farming. This removal of privatisation of industry and agricultural lands brought about a civil war, as I mentioned earlier, between the capitalist backed whites and Lenin's red army. The war was relatively short and resulted in a red army victory; this mainly was due to good leadership and most of all the system of war communism (the most harsh form of communism where everything is taken by the state). ...read more.

It is highly likely the great armies of the west will quickly begin to crumble under this enormous burden, resulting in them feeling forced to step out of convention, into the realm of nuclear weapons, in hope to abolish the communist economy and annihilate the terrorist threat. However in doing so they will enter into a nuclear war with Russia. With missiles being launched by the hundreds from both west to east, and east to west, the world would be consumed in nuclear chaos. The result will be either the total annihilation of mankind, or just the modern world, if so there is hope for mankind. I believe there is a form of governing that is capable of handling the burden of restoring the world, as you may have guessed communism. In a world where all aspects of capitalist society have been abolished and religious faiths tested to and beyond their limits. There would be a place for true communism where there are no divisions in the world and all remaining resources can be used to their full potential. And the best news is that according to Leninist Marxist Communists, this will all happen in about twenty years. The fact that the Leninist Marxist Communists could well be wrong is almost irrelevant, because in all of the four forms of governments there is an agreement that in some way there will at least be a significant crash in capitalism eventually. ...read more.