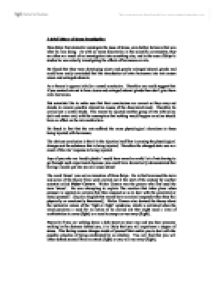 A brief history of stress investigation

A brief history of stress investigation Hans Selye first started to investigate the issue of stress, even before he know that was what he was doing. As with so many discoveries in the scientific community, they are often as a result of an investigation into something else, and in the case of Selye's studies he was actually investigating the effects of hormones on rats. He found that they were developing ulcers and greatly enlarged adrenal glands and could have easily concluded that the introduction of extra hormones into rats causes ulcers and enlarged adrenals. As a theory it appears initially a sound conclusion. Therefore one could suggest that if you wanted rats not to have ulcers and enlarged adrenal glands then don't give them extra hormones. But scientists like to make sure that their conclusions are correct so they carry out checks to remove possible alternative causes of the discovered result. Therefore he carried out a control study. This means he injected another group of rats with saline (salt and water mix) with the assumption that nothing would happen as saline should have no effect on the rats metabolism. ...read more.

Walter Cannon also devised the theory about the instinctive nature of the 'fight or flight' syndrome, which is activated when the mind perceives a need for an action to be carried out that might need a level of confrontation to occur (fight) or a need to escape or run away (flight). Basically if you are walking down a dark street on your own and you hear someone walking in the distance behind you, it is likely that you will experience a degree of stress. This feeling causes changes inside of yourself that enable you to deal with the possible situation of being confronted by an attacker. You will find that you will either defend yourself from an attack (fight) or you will run away (flight). Therefore Walter Cannon's investigations proved to be a help to Hans Selye's work General Adaptation Syndrome Hans Selye (1956) proposed a theory about how the human body responds to stress, which he termed as the General Adaptation Syndrome (GAS). He defined stress as "the individual's psycho-physiological response, mediated largely by the autonomic nervous system and the endocrine system to any demands made on the individual". ...read more.

The nervous system now activates signals to get the body to return to its original state - it resists the stress situation successfully and is enabled to carry on life as it was before the stress occurred. Phase three occurs when the stress continues, being either the same stress situation, or several different stress issues following one after another. The continual level of stress causes the immune system to dysfunction or deactivate so the person becomes more prone to ill health, and in some cases cause major health problems and sometimes death. You would think that most people would avoid getting into a phase three scenario but sadly with the pressures of modern lifestyle more and more people are finding themselves suffering from ongoing or continuous stress. The media is continually advertising what we should have, how we should behave, what we should be striving for all of which costs money or time, which we seem to have very little of. You should own a home, have children, take holidays abroad, own and understand a computer, ensure that your children achieve well in school, maintain a wholesome relationship, meet deadlines at work, be self aware, be self critical, be self confident. Oh yes, and don't get stressed! 2 ...read more.