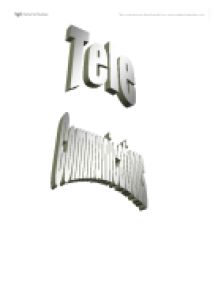 BY: Muhammed Ali X A Following is a brief outlook on some of the various forms of Telecommunications and different advances in Telecommunication technologies. Sprint Videoconferencing Services - Meetings are Easier with a Complete Videoconferencing Solution When visual impact is essential for a successful meeting, Sprint videoconferencing services bring you virtually face-to-face with people around the world. By choosing Sprint for videoconferencing, you can get a range of quality services that make Sprint your one-stop source: equipment, installation and maintenance, network/transport, streaming capabilities (Internet broadcast), and full-featured Service Bureau support, including reservations and a large network of public rooms Wireless Application Protocol (WAP) The Wireless Application Protocol (WAP) is the de-facto world standard for the presentation and delivery of wireless information and telephony services on mobile phones and other wireless terminals. Handset manufacturers representing 90 percent of the world market across all technologies have committed to shipping WAP-enabled devices. Carriers representing more than 100 million subscribers worldwide have joined WAP Forum. This commitment will provide 10's of millions of WAP browser-enabled products to consumers by the end of 2000. ...read more.

Wireless Hotspot Deployment Guide HotSpots came in many sizes and shapes and usually with their own set of challenges. Gathering requirements, doing a site survey and choosing the right equipment are the three most important factors for success. As in any other worthwhile project, make sure you spend enough time getting an understanding of what you need to deliver. As wireless HotSpots become more popular, the number of users at your HotSpot is likely to increase. Make sure you plan for the next revolution in communications. Third Generation (3G) Wireless Third Generation (3G) mobile devices and services will transform wireless communications into on-line, real-time connectivity. 3G wireless technology will allow an individual to have immediate access to location-specific services that offer information on demand. The first generation of mobile phones consisted of the analog models that emerged in the early 1980s. The second generation of digital mobile phones appeared about ten years later along with the first digital mobile networks. During the second generation, the mobile telecommunications industry experienced exponential growth both in terms of subscribers as well as new types of value-added services. Mobile phones are rapidly becoming the preferred means of personal communication, creating the world's largest consumer electronics industry. ...read more.