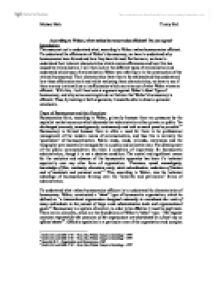 According to Weber, what makes bureaucracies efficient? Do you agree?

According to Weber, what makes bureaucracies efficient? Do you agree? Introduction This essay set out to understand what, according to Weber makes bureaucracies efficient. To understand the efficiencies of Weber's bureaucracy, we have to understand why bureaucracies have formed and how they have formed. Furthermore, we have to understand their inherent characteristics which creates efficiencies and how this has caused by rationalisation. I will then look at the different types of rationalisation and understand which type of rationalisation Weber was referring to in the construction of the rational bureaucracy. Their characteristics have then to be analysed and thus understood how these efficiencies work and whilst analysing these characteristics, we have to see if there are any irrationalities or inefficiencies which can arise out of what Weber views as efficient. With this, I will then look at argument against Weber's Ideal Type of bureaucracy, and why some sociologists do not believe that Weber's bureaucracy is efficient. Thus, by looking at both arguments, I would be able to drawn a personal conclusion. Types of Bureaucracy and their Functions Bureaucracies form, according to Weber, primarily because there are pressures by the capitalist market economy which demands that administration either private or public "be ...read more.

Conclusion In conclusion, bureaucracy is efficient, according to Weber, because of rationalisation. It is the process of rationalisation that leads to the construction on a rational-bureaucratic system. This bureaucratic system has ingrained characteristics of efficiency according to Weber. However, it is argued whether these characteristic are inherently efficient or does it lead to a myriad of inefficiencies. I would agree with Weber that bureaucracies are efficient, in his context, but his ideal type of bureaucracy is utopian and unable to fit in to the pragmatic world we are in today. Efficiency is a relative term, and thus to be able to answer whether Weber's bureaucratic is system is efficient, is to judge it relative to other systems. Weber advocated a Professional Bureaucracy which characteristic made is a rational body, where the organisation has certain goals and objectives in mind. Relative to other bodies, such as a patrimonial or honorific bureaucracies, a professional bureaucracy seems to be able to reach its goals through more stable and continuous means. Thus, I believe that Weber's doctrine seems to be more efficient relative to others. However, this does not mean that Weber's rational bureaucracy is efficient but rather it is better, relative to the rest. ...read more.