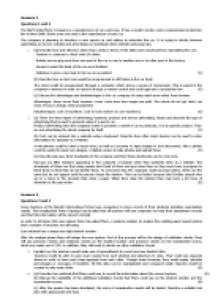 ﻿Scenario 1 Questions 1 and 2 The North India Motor Company is a manufacturer of cars and vans. It has a modern factory and a computerised production line in New Delhi. Robot arms are used in the manufacture of each car. The company is planning to introduce a new sports car and wishes to advertise this car. It is trying to decide between advertising on its own website and advertising on somebody else?s website using pop-ups. 1. (a) Describe four end effectors, other than a drill, in terms of the tasks each would perform assembling the cars. - Sensors or cameras to check work of robots. - Robots arm to grip parts from one part of the car or van to another one or to other part of the factory. - Sprays to paint the body of the car once finished. - Polishers to give a nice look to the car once painted. (4) (b) Describe how a robot arm would be programmed to drill holes in the car body. The robot would be programmed through a computer which stores a series of movements. This is saved in the computer?s memory in order to repeat it trough a remote control and could approach a production line. (4) (c) Discuss the advantages and disadvantages to the car company of using robot arms rather than humans. Advantages: fewer errors than humans. Lower costs since less wages are paid. The robots do not get tired, can work 24 hours all days. Best productivity Disadvantages: Cost of machines. Cost to train workers to use machinery. (6) 1. (a) There are three types of advertising; business, product and service advertising. Name and describe the type of advertising that is used to promote sales of a sports car. Product advertising since the company wants to promote a model of car in particular, it is an specific product. They are not advertising the whole company by itself. ...read more.

Their own website would be better, since has shorter delay and will be suited to their own fits. (5) (d) Give the advantages of using flyers to advertise the company locally. They can produce them using their own PC and printer. They are produced easy and quickly. You can choose who to send them, so that they only reach people interested. It is cheaper than creating a website or paying for an advertising on the television. (4) ________________ Scenario 7 Questions 10 and 11 Sellafield food shops is a national chain of supermarkets in the UK. They have recently implemented a website for their customers, who can now order their shopping online and have it delivered to their home. They have also created an overseas call centre so that if customers have problems with the website they can contact the company to fix these problems. The management of the call centre is to introduce shorter working periods (shifts) due to pressure from the workers. 1. (a) Describe the features of a well designed online shopping website. Security of users information so that hackers don?t interfere it. Easy web domain so that users can remember it easily. Good quality of photos and description of each item. Make users register with an username and a personal password. Possibility to track orders to see in what situation they are. (4) (b) Explain the security issues involved with such a website. Hackers can intercept personal data of users, such as information of their credits cards and may use this to buy on other pages. Personal data also could be use by hackers to log on this page and order more items. Hackers may have an issue on the shop. (3) (c) Discuss whether customers should feel concerned about using this online shopping system. The shop should encrypt the data of users so that if it is intercepted by hackers, this can not read it. ...read more.

To identify problems. Diagrams show weaknesses of the system. Helps to identify software and hardware of the new system. Can see exactly the job of each worker. (5) (c) Describe how Vikram will identify the information requirements for a new system. Collect data experimenting with the actual system. Interview personally users to find out requeriments. (2) 1. (a) Describe the factors which will influence Vikram when designing the input and output layouts. Fullfill user requeriments and be easy to use for workers. Attractive and new lookout. Must have instructions for users. Consider who will see outputs. Screen output should be simple so that workers understand it easily. (6) (b) After the system has been developed it will need to be implemented. Discuss the different methods which could be used. Parallel running: running old system next to the new one. Is expensive Phased running: running one part of the new system together with a part of the old one. Is cheaper. Pilot running: running the new system on one branch of the company while the other still uses de old one. Problems get limited to one office. Direct changeover: replacing totally the old system by the new one. Cheaper and quicker but you can not go back to see something of the other system. I would choose pilot running to see what happens. (6) 1. Describe how the data will be organised on the database to allow Rajvinder to access a book record quickly. Each record can have and index and the index related to a letter of the alphabet. When this letter is found the index appear with the record. Records are searched sequentially from that point. (4) 1. After the system has been implemented Vikram will need to evaluate it. Describe the process of evaluation. By using test results he can compare the actual results to the expected results. Modifications made if results are not as expected. By obtaining feedback of workers. Sending questionnaires to workers in order to see what they think about the system and identifying limitations of the system. (5) ...read more.