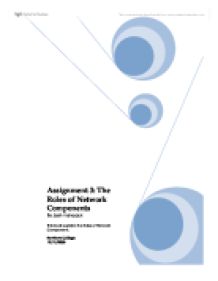 Assignment 3: The Roles of Network Components By Josh Hancock This book explains the Roles of Network Components. Farnham College 19/12/2008 Assignment 3: The Roles of Network Components Chapter 5 Chapter 5a Network Components Servers A server is a definition that is used for two things, a piece of software that is designed to provide services to users on the same, or another, computer. The other use of the word server is, the physical computer that runs the server programs, such as a Network Operating System (e.g Windows Server 2008). Network Interface Cards (NIC) Network Interface Cards, sometimes referred to as NIC's, are a piece of hardware which is designed to allow a computer to communicate over a computer network. The Network Interface Card gives the computer the ability to plug in a network cable (Ethernet cable or Coaxial cable, depending on the ports on the NIC) to access the network. Workstations A workstation is a high end microcomputer (also known as a Personal Computer or PC) that is designed for the purpose of running technical or scientific programs. A workstation is intended to be used by one person at a time although they run multi-user operating systems. ...read more.

Now that the router and computer are connected to the network, you need to plug the RJ11 telephone cable into the port in the filter nearest the router and into the back of the router. Then, if the Internet Service Provider has activated the line, the router will connect to the internet, providing access to the computer and all other devices that will be connected in the future. Operation and Performance Range The range of a wired connection varies on the length of Ethernet cable you buy. Also the range is limited by the structure of the house, for example, if you want internet in a room that you can't get the cable into because the wall can't have a hole drilled in it for example, then that limits the range. Ease of Installation This is very easy to install if everything is being situated in the same room, if the telephone box is situated in another place or the computer is situated in another room, it can be slightly trickier to install because holes will have to be drilled to feed the cable through. ...read more.

For example, in a house, you can have a laptop that you can take into the garden and surf the web while sun bathing or if you have a games console plugged into your TV, you don't have to have a really long wire connecting it to the router. There are some disadvantages though, if more wireless devices connect, the performance decreases and if you are further away, the performance will also decrease. Wireless LANs are suitable for File Sharing and Printer Sharing but not gaming or anything that uses the network heavily. Theoretically, Wireless LANs are less secure as the signals travel in the air and can be intercepted but this is rarely seen being practiced. It is important that security on the Wireless LAN is enabled to protect access from unauthorised users, so this would be using WPA or WPA2 security. For the family, because of their needs, it is best to use a Wireless LAN which will then allow them to have a Media Centre Extender in their living room, have a laptop that can be used anywhere in the house and a PC which will be upstairs in the office/study. ?? ?? ?? ?? Farnham College BTEC National Certificate IT P (Software Development) Unit 8: Communications Technology Josh Hancock Unit 8: Communication Technology Page 2 of 6 ...read more.