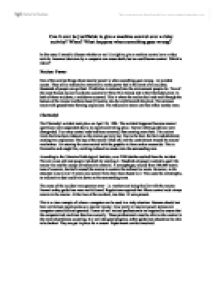 Can it ever be justifiable to give a machine control over a risky activity? When? What happens when something goes wrong?

Can it ever be justifiable to give a machine control over a risky activity? When? What happens when something goes wrong? In this essay I intend to discuss whether or not it is right to give a machine control over a risky activity. Incorrect decisions by a computer can cause death, but so could human control. Which is riskier? Nuclear Power One of the scariest things about nuclear power is when something goes wrong - an accident occurs. They utilize radioactive materials to make power but in the event of an accident, thousands of people can get hurt. If radiation is released into the environment people die. Two of the most famous nuclear accidents occurred at Three Mile Island, and at the Chernobyl plant. In both of these accidents, a meltdown occurred. This is where the molten fuel rods melt through the bottom of the reactor and then about 20 metres into the earth beneath the plant. The uranium reacts with groundwater forming explosions. The radioactive steam can then affect nearby areas. Chernobyl The Chernobyl accident took place on April 26, 1986. The accident happened because normal operations were suspended due to an experiment taking place. ...read more.

To help avoid accidents, humans should be provided with an on-the-spot diagnosis of the problem along with error tolerant corrective actions. Human operators should continuously monitor and try to detect failures of system components. Failures are very significant, as they can affect the accuracy of the control system algorithms. A good example of such a failure is the NORAD moon attack. A faulty sensor gave incorrect information to the system and missiles were nearly launched. One General decided that the sensor was faulty and stopped the missiles from firing. Starting unsafe operations should be difficult, while stopping such actions should be easy. For example, a missile should have to be armed before it can be fired. The fire button should not be touch sensitive and should require a complicated code to be entered. This would help to prevent an accidental firing. The interface should augment human abilities and not replace them. The operator's task should not be oversimplified. It should provide facilities for operators to experiment, and to update their mental models of the system. A method of providing alternative sources of critical information in case the display fails should be available to the operator. ...read more.

The shearer can cut 900mm of coal from the face on each pass. The maximum daily output (24hrs) has been 46,340 tonnes of coal. The shearer can mine such a large amount of coal due to the fact that the mine is operating 24 hours a day. Machines do not need a rest or break. A well designed machine can be very efficient. All of the processes in the mine are computerized. This includes cleaning the coal to remove its natural impurities, sorting it into size groups, and drying it to remove moisture. As these stages are computerized, it ensures that customers are getting coal of a consistently high quality. By computerizing the coal mining industry, the risk to human workers has been greatly reduced. This is an industry that has benefited greatly by computerization. Personal Views The issue over who should be responsible for the detection of an impending accident and initiate shutdown procedures should be considered. Is it better for a human or a machine to make the judgment? My opinion is that if a system is so risky that a machine must initiate the shutdown, perhaps the system should not be built at all. Machinery is replaceable, but human life is not. ...read more.