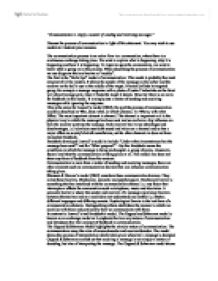 &quot;Communication is simply a matter of sending and receiving messages&quot; Discuss the process of communication in light of this statement. You may wish to use models to illustrate your answers.

"Communication is simply a matter of sending and receiving messages" Discuss the process of communication in light of this statement. You may wish to use models to illustrate your answers. The communication process is an active flow in a conversation, where there is a continuous exchange taking place. We want to explain what is happening, why it is happening and how it is happening. To improve upon the conversation, we want to know what is going on in the process. When describing the process of communication we use diagrams that are known as "models". The first is the "Bulls Eye" model of communication. This model is probably the most simplest of all the models. It shows the sender of the message as the archer and the receiver as the bull's eye in the middle of the target. It basically finds its targeted group, for example a teenage magazine with a photo of Justin Timberlake on the front will attract teenage girls. ...read more.

and for "What purpose?" - By this Braddock means the conditions in which the message is being exchanged i.e. group of peers, classroom, funeral and why the communication is taking place at all. This model also does not show any form of feedback from the receiver. Communication is more than a matter of sending and receiving messages, there are other elements such as communication barriers that can influence communication taking place. Shannon & Weaver's model (1949) considers these communication barriers. They called these barriers, Mechanical, semantic and psychological. Mechanical barrier is something that has interfered with the communication channel i.e. any factor that interrupts or effects the conversation such as telephone, music and television. A semantic barrier is where the sender and receiver of a message experience barriers between themselves and as a result does not understand one another i.e. Stutter, different languages and differing accents. ...read more.

Positive feedback, i.e. mirroring, eye-contact and leaning forward allows the sender to carry on with what they are saying. On the other hand negative feedback such as leaning back, no eye-contact, yawning etc will force the sender to change the subject, change style, or even stop speaking. David Berlo developed on from Shannon and weaver's model to create a framework that demonstrates the complex web of skills and knowledge which two parties must have, in order to communicate successfully. According to the Berlo model the sender and the receiver have to share communication skills, attitudes, social system, knowledge and culture for smooth communication to take place. An example of this would be, someone trying to explain something in sign language, however if the receiver does not know sign language then the communication process will break down. To conclude, communication is a matter of sending and receiving messages however there are many elements in between sending and receiving these message in order to have successful conversation, for example to take into consideration the communication barriers which might be there. ...read more.