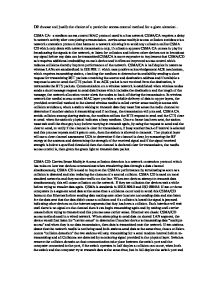 Communication technologies. choose and justify the choice of a particular access control method for a given situation.

D2 choose and justify the choice of a particular access control method for a given situation. CSMA CA: a medium access control MAC protocol used in a bus network CSMA/CA requires a delay in network activity after completing a transmission. carries sense multiple access collusion avoidance is a network contention protocol that listens to a network allowing it to avoid any collusion unlike CSMA CD which only deals with network transmission only, if collusion appears CSMA CA comes in play by broadcasting the signals to the network, to listen for collusion and inform other devices not to broadcast any signal before any data can be transmitted.CSM/CA is more expensive to implement that CSMA/CD as it requires additional embedding on each device and it offers an improved access control which reduces collisions thereby improve performance of the network. CSMA/CA is half duplex in nature as wireless LANs are standardized in IEE 802.11 which uses positive acknowledgement ACK mechanism, which requires transmitting station, checking the medium to determine its availability sending a short request for transmitting RST packets containing the source and destination address and if available a response is sent to send the CTS packet. If an ACK packet is not received from the destination, it retransmits the RTS packets. ...read more.

When two devices attempt to transmit data simultaneously, this will cause collusion on the network. If they are collusion the devices wait a while before trying to transfer data again. CSMA is standards in IEEE 802.3 and ISO 8802.3. If two or three computers in a segment send data at the same time a collisions occur and to avoid this CSMA/CD listens to the Ethernet before sending data making sure other host are not sending data and also listen for the data sent that the data didn't cause a collision and if a collision is heard the signal is jammed indicating other devices on the internet segments that they has been a collision. Each interface will wait until there is no signal on the channel then it can begin transmitting again and by waiting until carrier ceases before trying to transmit and this process uses carrier sense. Ethernet are classic CSMA/CD access method used in a wired network. When attempting to send data on shared LAN segment, the device would first listen for "carrier sense" to determine if another device is transmitting data "multiple access" and when they is no data transmission, then data is transmitted onto the network. If two stations detect that the network media is not being used both stations send data at the same time, thus a collision occurs "collision ...read more.

Computers equipped with a wireless card can all communicate in the same wireless device, provided they are in range and a wired LAN needs one port for each computer connected, wireless networks eliminates the need for wiring, provides flexibility for location of PCs and access point though they offer lower performance, greater complexity and increased expenses. Wireless LAN has many advantages, allowing data capture on site and in real time and spreading of information is improved and runs over TCP which offer a reliable service delivery. Wired network LAN has a higher data transfer rate than WAN network though WAN has a faster transfer rate to LAN each offer different advantages. WAN are faster , as wireless are affected by distance which affects the signal strength thus the download speed, while wired network is not affected by distance as long as it reaches the terminal computer. My conclusion is if you require the freedom of accessing the internet in any stations a user would choose a wireless network and for security purposes you may choose LAN network which offers a higher security than WAN and also provides a more reliable internet connection. The limitation with wireless is hidden node problem which disrupts communication in a busy wireless environment and the problem occurs when a station cannot detect the transmission of another station and the use of request to send, clear to send helps to prevent any disruptions. ...read more.