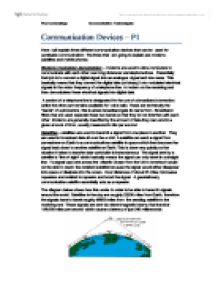 Communication Devices - P1 Here I will explain three different communication devices that can be used for worldwide communication. The three that I am going to explain are modems, satellites and mobile phones. Modems (modulator-demodulator) - modems are used to allow computers to communicate with each other over long distances via telephone lines. Essentially their job is to convert a digital signal into an analogue signal and vice versa. This basically means that they convert the digital data (or binary) into modulated electrical signals in the voice frequency of a telephone line. A modem on the receiving end then demodulates these electrical signals into digital data. A section of a telephone line is designated for the use of a broadband connection whilst the other part remains available for voice calls. These are technically the "bands" of a phone line; this is where broadband gets its name from. Broadband filters that are used separate these two bands so that they do not interfere with each other. Modems are generally classified by the amount of data they can send in a given amount of time; usually measured in bits per second. Satellites - satellites are used to transmit a signal from one place to another. They are used to broadcast data all over the world. A satellite can send a signal from somewhere on Earth to a communications satellite in space which then bounces the signal back down to another satellite on Earth. This is done very quickly so the duration it takes to transfer data worldwide is instantaneous. The signal sent by a satellite is "line of sight" which basically means the signal can only travel in a straight line. If a signal was sent across the Atlantic Ocean from the UK to America it would not be able to reach the recipient satellite because the signal would either disappear into space or dissipate into the ocean. ...read more.

Transmission Media - P4 Different transmission media that are used are coaxial, optical fibre, unshielded twisted pair (UTP), and shielded twisted pair (STP) cabling. Wireless types are Bluetooth, WIFI, and satellite. Coaxial cabling - this is used as a transmission line for radio frequency signals; in applications such as radio transmitters and receivers with their antennas, computer network connections, and distributing cable television signals. One advantage of coaxial cabling over other transmission media is that the electromagnetic field carrying the signal only exists in between the inner and outer conductor. This means the cabling can run next to other metal objects without electromagnetic power loss or interference. This supports up to 1 GHz bandwidth. Optical fibre cabling - this is a transmission media that uses laser to transmit data. The cable permits transmission over longer distance at higher bandwidths than any other data transmission media. A cable contains hundreds of fibre optic strands which lasers reflect down off glass or plastic within the tubes. The different strands are different colours which change in accordance to the data that is being transmitted. Fibre optical cabling is often used instead of metal wiring because signals travel along them with less loss and they are also immune to electromagnetic interference. This supports up to 75 THz bandwidth. Unshielded twisted pair (UPT) - these cables are usually found in Ethernet networks and telephone systems. The cables inside a twisted pair are all twisted in pairs; hence its name. The insulated wires are made from copper. A disadvantage of this type of cabling is that it is susceptible to electromagnetic interference as it is not shielded from this. This can degrade the signal quality; this is why it is not used in densely populated areas. An advantage of this cable is that it is much lower in cost than optical fibre and coaxial cabling. This supports up to 1 MHz bandwidth. ...read more.

A disadvantage of parity bits is that when transferring data over a transmission media with interference or noise, it may take a long time for the data to be sent successfully because the data may need to keep being resent. In some cases the data may not even be transferred successfully at all. An advantage is that parity bits only use 1 bit of data. Checksums - this is designed to detect accidental changes to computer data. A short fixed binary sequence is calculated for each block of data that is send and stores them both together. When a block is read or received the device repeats the calculation; if the new binary sequence does not match with the one calculated earlier, the block contains a data error and the device will need to request the data to be sent again. Repetition codes - this is a coding technique detects whether a transmission route contains problems. A stream of data with repeated bits is sent over a channel to detect whether there is an error-free communication. When the bits arrive at the receiving end the device on the other end checks that the repeated bits are the same as what was transmitted. An example of a stream of bits that could be sent is "1011 1011 1011". If the bits arrive at the receiving end as "1010 1011 1011" then the first block of bits do not match and there is obviously a problem with the transmission route. Repetition codes are not very efficient because they only check the route the data is being sent and do not check whether the actual data has been transferred without errors. They can also be susceptible to problems if the error occurs in the same place for each group of bits sent. Using the previous example; if "1010 1010 1010" was continually being received, errors may not be detected so it is not completely accurate. An advantage of repetition codes is that they are an extremely simple technique. ?? ?? ?? ?? Paul Leverseidge Communication Technologies ...read more.