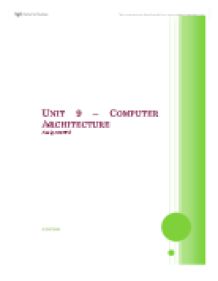 UNIT 9 - COMPUTER ARCHITECTURE Assignment 3 Table of Contents Task 1 3 Von Neumann Architecture 3 Definitions 3 Current Architectures 4 Task 2 5 Microprocessor 5 Memory 6 Pipelining 6 Parallel Processing 7 Task 3 8 Fetch - Decode - Execute 9 Task 4 10 Core Duo vs. G5 10 Bibliography 11 TASK 1 Von Neumann Architecture Definitions (Wikipedia n.d.) Memory - Where the data to be read or executed is located. Control Unit - The control unit coordinates and controls all the operations carried out by the computer. It operates by repeating three operations: fetch, decode and execute. ALU (accumulator) - The ALU can perform two sorts of operations on data. Arithmetic operations include addition, subtraction, multiplication and division. Logical operations consist of comparing one data item with another to determine whether the first data is smaller than, equal to or greater than the second data item. Arithmetic - Add, Subtract Logic - If Greater than, If less than Data manipulation - Move command, Input command Flow Control - Go to command, Brach off command Input - Data is sent to the input when it is called. Output - Data is outputted when it has been executed. ...read more.

For the majority of performance tests that I conducted on the iMacs, leaving the G5 set to Automatic actually gave me performance within about 3% of the system's performance if I set the energy saver setting to Highest. However, there were some benchmarks where the iMac incorrectly would not increase CPU frequency in order to accommodate a very high demand task. The best example that I could find was my QuickTime Pro 7 H.264 encoding test. With the G5 running in Automatic mode, the test took over 25 minutes to complete, compared to 9.8 minutes for the Core Duo. Setting the processor performance to Highest, the G5's time dropped down to a more respectable 12.3 minutes, a reduction of more than 50%! The goal of the Automatic processor performance setting should be to crank up CPU frequency when it's needed, and scale it back when it's not. The results that I saw in my QuickTime test show that it fails at that goal in a major way, which isn't acceptable. There were a few other isolated cases where the same was true, forcing me to leave the iMac G5 in its highest performance state for all of my performance tests. In conclusion to this review I found that the Core Duo processor is far more effective and is even slightly cheaper than the G5 version. ...read more.