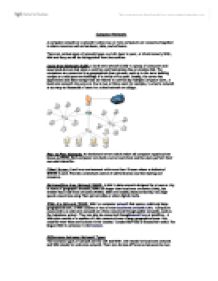 Computer Network A computer network or a network is when two or more computers are connected together to share resources such as hardware, data, and software. There are various types of network types e.g. LAN (peer to peer, or client/server), WAN, MAN and they can all be distinguished from one another. Local Area Network (LAN): A local area network (LAN) is a group of computers and associated devices that share a common communications line or wireless link. The computers are connected in a geographical close network, such as in the same building campus or could span two buildings of a similar office park. Usually, the server has applications and data storage that are shared in common by multiple computer users. A local area network may serve as few as two or three users for example, in a home network or as many as thousands of users in a school network or college. Peer to Peer Network: No dedicated servers which makes all computes equal and are known as PEERS. Each computer acts both a server and client and the users perform their own administration. Client Server: Used in an environment with more than 10 users where a dedicated SERVER is used. ...read more.

Compatibility with existing equipment and computer systems. E Mail Advantages Savings on stationery and paper costs. Savings on telephone costs. Rapid transmission. Integration with other systems. The recordings of all transmissions so that accurate costings can be obtained. Allowing addressees to peruse their own electronic mail at leisure. File Transfer Facility which enables a user to transfer files electronically to another computer or to a printer. Transfer across the internet from FTP sites is also common Online Database Internet Search Engines Online catalogues Support Sites Forums Online Data Storage Bulletin Boards Bulletin boards operate rather like a notice board, Allows individuals to leave messages, Various information, such as notices or memoranda to all staff can be found on an internal bulletin board A bulletin board may be setup by a service or product provider to keep users or purchasers informed of new developments Internet, bulletin boards, either free or requiring a subscription, which hold some very useful information which can be accessed and downloaded by any user. Conferencing In its most primitive form, conferencing allows number of individuals to speak to one another simultaneously over telephone network. Video-conferencing Chat rooms Telephone conferencing Network Topology The term topology or more specifically network topology refers to the physical layout of computers, cables and other components on the network. ...read more.

that a message is divided into for efficient routing through the Internet. NetBUEI NetBEUI (NetBIOS Extended User Interface) is a new, extended version of NetBIOS, the program that lets computers communicate within a local area network. (LAN) Apple talk AppleTalk is a set of local area network communication protocols originally created for Apple computers. IPX/SPX IPX (Internetwork Packet Exchange) is a networking protocol from Novell that interconnects networks that use Novell's NetWare clients and servers. IPX is a datagram or packet protocol. Packet acknowledgment is managed by another Novell protocol, the Sequenced Packet Exchange (SPX). SMS SMS (Short Message Service), commonly referred to as "text messaging," is a service for sending short messages of up to 160 characters (224 characters if using a 5-bit mode) to mobile devices, including cellular phones, smartphones and PDAs. GPRS General Packet Radio Services (GPRS) is a packet -based wireless communication service that promises data rates from 56 up to 114 Kbps and continuous connection to the Internet for mobile phone and computer users. FTP File Transfer Protocol (FTP), a standard Internet protocol, is the simplest way to exchange files between computers on the Internet. SMTP SMTP (Simple Mail Transfer Protocol) is a TCP/IP protocol used in sending and receiving e-mail. DHCP DHCP (Dynamic Host Configuration Protocol) is a communications protocol that lets network administrators centrally manage and automate the assignment of Internet Protocol (IP) addresses in an organization's network. ...read more.