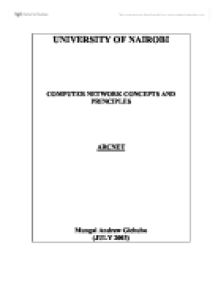 UNIVERSITY OF NAIROBI COMPUTER NETWORK CONCEPTS AND PRINCIPLES ARCNET Mungai Andrew Gichuho (JULY 2003) HISTORY Datapoint Corporation introduced ARCNET, classified as a local area network (LAN), as office automation in the late 1970s. ARCNET is coined from two words i.e. ARC & NET. ARC in full is attached resource computer and NET is from the word network. So ARCNET in full means attached resources computer network. ARCNET's use as an office automation network has diminished but continues to find success in the industrial automation industry because its performance characteristics are well suited for control. It is very robust, fast and provides deterministic performance. In addition, it can span long distances thus making it a suitable fieldbus technology. The term fieldbus is used in the industrial automation industry to signify a network consisting of computers, controllers and devices mounted in the "field". ARCNET is an ideal fieldbus that delivers a message in predictable time fashion because of its token-passing protocol that it uses. ARCNET packet lengths vary from 0 to 507 bytes with little overhead and high data rate, typically 2.5 Mbps, yields quick responsiveness to short messages needed by feldbus. It has a built-in CRC-16 (cyclic redundancy check) error checking and supports several physical cabling schemes including fiber optics. The data link protocol is self-contained in the ARCNET controller chip. Network functions such as error checking, flow control and network configuration are done automatically without software intervention. In terms of the International Organization of Standards OSI (Open Systems Interconnect) Reference Model, ARCNET provides the Physical and Data Link layers of this model. In other words, ARCNET provides for the successful transmission and reception of a data packet between two network nodes. A node refers to an ARCNET controller chip and cable transceiver connected to the network. Nodes are assigned addresses called MAC (medium access control) IDs and one ARCNET network can have up to 255 uniquely assigned nodes. ...read more.

Coaxial is relatively inexpensive and provides the highest propagation factor compared to all other media. ii) Twisted-pair Twisted-pair cable is inexpensive and convenient to user and easy to terminate though it exhibits greater attenuation and therefore limited distance capability. Its compatible with several transceivers though IBM type 3 is the most recommended. iii) Fiber Optic: Offers the greatest distance bur requires more attention to its application. It comes in a variety of cables and cable pairs. Fiber optics span the greatest distance with a low propagation factor. Its installation should be evaluated to ensure that it is within ARCNET limits. NB: All cable installations must comply with the ISO - OSI ordinance. iv) Coaxial Cable: Good Price Vs Performance The original ARCNET called for coaxial cable as the formal medium between hubs and NIMs. Transceivers were developed to remove hubs but the coaxial cable remained. The two transceivers: 1. Coaxial cable for distributed star systems 2. Coaxial bus for hubless systems. P1 and P2 Signaling: ARCNET controllers develop two signals, P1 and P2; where P1 and P2 are negative signals of 100nanoseconds in duration with P2 following P1 when operating at 2.5mbps data rate. ARCNET controllers transmit a signal when logic 1 is transmitted, with logic 0 rendering the line idle as no pulses are sent. Star Vs Bus: The coaxial star transceiver and the coaxial bus transceiver both receive P1 and P2 signals and generate dipulse signals. However, the star transceiver represents a low impedance at all times while the bus transceiver represents high impedance when idle allowing for multiple transceivers to be attached to a common bus. TWISTED-PAIR - INEXPENSIVE AND SIMPLE TO USE. Twisted-pair in ARCNET is quite inexpensive and easy to use as well as top terminate. It is actually a very popular cabling technology. Compared to the coaxial cable, it has a higher attenuation and modular jacks and plugs are used to interconnect segments. ...read more.

and the reconfiguration time (the time a node waits before initiating a reconfiguration burst). SOFTWARE STANDARDS OSI MODEL: This model describes the various layers of services that may be required in order for two or more nodes to communicate to one another. ARCNET conforms to the physical layer and the medium access control portion of the data link as defined by IEEE. All the layers above the data link layer collectively are called the protocol stack and the number of services available or used by differing applications vary. The software required to bind a network interface module to a protocol stack is called a driver and many different drivers exist for ARCNET. Collapsed Stack or Null Stack: The application layer is tied directly to the Data Link layer. It is a popular approach for embedded networking. Control Link - SMSC developed IEEE 802.2 services that provide logical link control (LLC) above the MAC sub-layer. NetBios - Used with several peer-to-peer network operating systems and, frequently, the interface to ARCNET systems. Net BEUI - The NetBios Extended User Interface is both a NetBIOS interface and protocol. TCP/IP - TCP functions at the transport layer and IP functions at the Network Layer. The Protocols provide ARCNET connectivity to the Internet. IPX/SPX - Microsoft's version is called NWLink. NDIS - Network Driver Interface Specification is a driver specification, which allows an ARCNET to bind to NetBEUI, IPX/SPX or TCP/IP or any other protocol for which an NDIS compatible protocol driver has been written. ODI - Open Data link Interface. N/B: When installing ARCNET adapters, it should be ensured that the proper driver is available from the adapter supplier or the equipment OEM who specifies the ARCNET adapter. Conclusion: ARCNET Trade Association (ATA): This was formed in 1987 for the dual purpose of developing working standards for ARCNET and promoting the use of ARCNET as a viable networking technology. Besides endorsing ARCNET NetBIOS, the ATA is working with three standards: 1. ANSI/ATA 878.1 local Area Network: Token Bus 2. ATA 878.2 ARCNET Packet Fragmentation Standard 3. ATA 878.3 Encapsulation Protocol Standard. Site: [email protected] or www.arcnet. ...read more.