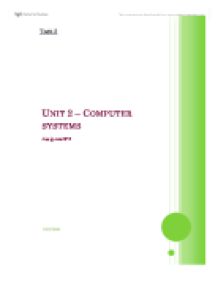 UNIT 2 - COMPUTER SYSTEMS Assignment 2 Table of Contents Task 1 2 Task 2 4 Task 3 7 TASK 1 Q1. Basic tasks performed by an operating system include: 1. checking the keyboard for input, controlling the transfer of programs in and out of main memory, communicating with the user, keeping track of files and directories on backing storage 2. controlling input and output devices, monitoring user activities, virus checking, 3. controlling system security, optimising graphics images, maintaining directories A1. 1 Q2. Some operating systems (such as Windows XP) enable multi-tasking. An example of multi-tasking is: 1. several users working on different programs on the same computer at the same time 2. many users logging on from remote terminals at the same time 3. a user working on spreadsheet whilst uploading files to the Internet and printing documents in background mode A2. 3 Q3. Operating systems may have command line or menu interfaces. Newer operating systems like MEPIS have: 1. menu driven interfaces 2. command line driven interfaces 3. no interfaces A3. 1 Q4. Most users prefer menu driven (GUI) interfaces because: 1. they don't need to remember complex command statements and therefore they're easier to use 2. they like to use technical language 3. it's faster to organise their workload A4. 1 Q5. When purchasing software applications it is important to ensure that it: 1. is written to run under the operating system on your machine 2. will run under all operating systems 3. contains its own operating system A5. 1 Q6. One function of an operating system is to handle interrupts. Interrupts are: 1. a delay in processing due to operating system overload 2. signals from hardware or software requesting attention from the operating system 3. messages received by your PC from other computers A6. 2 Q7. Certain applications require real time operating systems that respond to input and produce results instantly. ...read more.

However this does not show how a computer actually manages these processes but rather simply lists them. Each process running is stored in a PCB or Process Control Block, this contains basic information such as: - What it is - Where it is going - How much of its processing has been completed - Where it is stored - How many resources it has used When a process is activated it goes through "process states" which consist of: the program being initially activated (New), the program being used (Running), when the program is waiting to be put onto the processor (Ready), when the program is waiting for an event to occur (like a setup program) for it to continue running (Blocked) and when the program has finished execution (Exit). The operating system maintains the states of all the processes. Memory management - The operating system allocates available memory as efficiently as possible and it manages multiple processes in memory constantly. It does this by contiguously allocating the memory via single or multiple partitions. A single partition works running in low memory. Multiple partitioning allocates memory from an available block of memory that is free, this is dynamic partitioning. Memory must also be able to swap quickly between processes as they occur. Fixed partitioning is where the operating system partitions the main memory of a computer into a set of blocks. These partitions can be of equal and different sizes, and a process can only be loaded into it if the partition size is the same as or larger than the process requirement however if the process is smaller the entire block is still taken up. The main disadvantage of fixed partitions is internal fragmentation, this occurs when there is large amounts of wasted space in memory due to smaller processes taking up larger blocks. This can be reduced using unequal partition sizes in memory so that smaller processes can go in smaller blocks of memory and larger processes can go in larger block of memory. ...read more.

The internet browser is quite fast e.g. Mozilla Firefox, the picture viewer allows a moderate level of editing, the media player, Amerok is easy to use. Other applications and updates can be difficult to find. MEPIS Higher standard applications, they are more advanced than the Windows equivalent. Availability of commercial applications Most of the applications available on the market are designed to operate on a Windows system, there is high availability. - It is possible to install many applications through the use of MEPIS modifications. There is low availability of programs that are created purposefully for MEPIS. WINDOWS They have huge monopoly over the market. Support provided for add on devices Has a large amount of support for most common devices which install drives automatically so they can be used straight away. Has some drivers that may never be used. Windows does not provide support for all add-on devices. As there are no drivers installed by default therefore there is less wasted space. It gives the user the option of installing the drivers the user needs. There are no pre-installed drivers and it may be difficult to find compatible drivers to allow the add on device to function. WINDOWS Plug-and-Play function allows users to use devices instantly. Support offered by manufacturer Provides offline help as standard within the operating system, Also there is an online help service that is continuously updated. - There is a large community which can generally provide a large amount of up-to-date information. K-manual is available as a standard help program. It may take more time to solve the any problems due to the complexities of MEPIS. WINDOWS More simple and effective trouble shooting. Acceptance in the marketplace Windows is available worldwide and used in a number of different environments, including home and business. It can be expensive for large businesses to use. Some businesses use MEPIS over Windows due to its simplicity to provide an easy and efficient operating system for the company. - WINDOWS More common within the business world. ?? ?? ?? ?? Unit 2: Assignment 2 29/01/2009 1 TASK 3 ...read more.