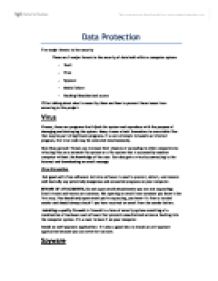 Five major threats to the security

These are 5 major threats to the security of data held within a computer system:

I’ll be talking about what is meant by them and how to prevent these issues from occurring in this project.

Viruses, these are programs that hijack the system and reproduce with the purpose of damaging and destroying the system. Many viruses attach themselves to executable files that may be part of legitimate programs. If a user attempts to launch an infected program, the virus' code may be executed simultaneously.

How they spread: Viruses can increase their chances of spreading to other computers by infecting files on a network file system or a file system that is accessed by another computer without the knowledge of the user. Can also gain a virus by connecting to the Internet and downloading an email message

Get good anti-virus software: Antivirus software is used to prevent, detect, and remove well basically any potentially dangerous and unwanted programs on your computer.

BEWARE OF ATTACHMENTS. Do not open email attachments you are not expecting: Email viruses and worms are common. Not opening an email from someone you know is the first step. You should only open email you’re expecting, you know it’s from a trusted sender and should always check if you have received an email from the sender before.

Installing a quality firewall: A firewall is a form of security system consisting of a combination of hardware and software that prevents unauthorized access or hacking into the computer system. It’s a must to have it on your computer.

Use a firewall: A small amount of spyware can actually be placed on your computer remotely by hackers. Installing a firewall or using the firewall that's built into Windows Vista and Windows XP provides a helpful defence against these hackers.

Update your software: Always ensure you haveautomatic updating turned on and that you've downloaded and installed all the latest critical and security updates.

Surf and download more safely: The best defence against spyware and other unwanted software is not to download it in the first place.  Much software tries to pose as anti-virus themselves when they’re actually spyware. Common sense is also recommended when downloading. If you think something is suspicious don’t download it.

Backup simply means you are keeping at least one copy of the original data, preferably not in the same disk media.

The Computer Misuse Act of 1990

Unauthorized Access to Computer systems with intent to commit another offence