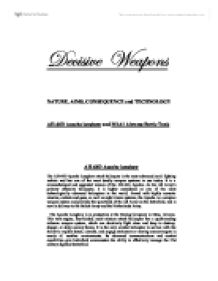 Decisive Weapons NATURE, AIMS, CONSEQUENCE and TECHNOLOGY AH-64D Apache longbow and M1A1 Abrams Battle Tank AH-64D Apache longbow The AH-64D Apache Longbow attack helicopter is the most advanced aerial fighting vehicle and has one of the most deadly weapon systems in use today. It is a remanufactured and upgraded version of the AH-64A Apache. As the US Army's primary offensive helicopter, it is highly considered as one of the most technologically advanced helicopters in the world. Armed with highly accurate missiles, rockets and guns, as well as night vision systems, the Apache is a complex weapon system and provides the spearhead of the US Army on the battlefield, and is now in delivery to the British Army and the Netherlands Army. The Apache Longbow is in production at the Boeing Company in Mesa, Arizona. This twin-engine, four-bladed, multi-mission attack helicopter has a quick-reading airborne weapon system, which can decisively fight close and deep to destroy, disrupt, or delay enemy forces. ...read more.

Through its Fire Control Radar, the AH 64-D aims to detect, classify and prioritise stationary and moving targets both on the ground and in the air. Also, with state of the art fire control, digital communications, automatic target classification and many other up to date features, the AH-64D Longbow Apache aims to dominate the digitised battlefield for years to come. During the recent Gulf War on the evolving battlefield air defence threat, the Apache Longbow AH-64D played a significantly decisive role for the US Army. It was able to significantly reduce crew workload in night and adverse weather and high threat environments, improve survivability in the face of pulse Doppler equipped SPAAGs and radar guided SAMs, outstandingly increase situational awareness in a highly dynamic and high threat battlefield environment, and improve weapons reach and countermeasures immunity, much shorter engagement times, while allowing for much higher aggregate rates of missile fire. ...read more.

It further aims to engage the enemy in any weather, day or night on the multi-dimensional, non-linear battlefield using its firepower, manoeuvre, and shock effect. The first crucial test for the M1A1 Abrams was the Gulf War in 1991, when it played a decisive role in spearheading the U.S attack on Iraqi fortifications and engaged enemy tanks whenever and wherever possible. The tank's ability to fire reliably when moving at speed over rough ground (because of the stabilized gun mount) gave it a capability that proved valuable in the Gulf War. Its vision devices proved effective not only at night, but also in the dust and smoke of Kuwaiti daytime. Its thermal sights were unhampered by the clouds of thick black smoke over the battlefields that were the result of burning Kuwaiti oil wells On average, a M1A1 Abrams outranged an Iraqi tank by about 1,000 meters. As a result, out of a total 1,848 M1A1 tanks, only eighteen were taken out of service due to battle damage: nine were permanent losses, and another nine suffered repairable damage, mostly from mines ...read more.