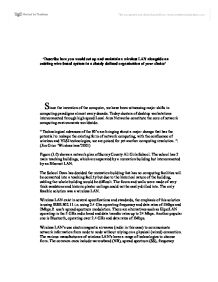 Describe how you would set up and maintain a wireless LAN alongside an existing wire-based system in a closely defined organization of your choice&amp;#146;

'Describe how you would set up and maintain a wireless LAN alongside an existing wire-based system in a closely defined organization of your choice' Since the invention of the computer, we have been witnessing major shifts in computing paradigms almost every decade. Today clusters of desktop workstations interconnected through high speed Local Area Networks constitute the core of network computing environments worldwide. " Technological advances of the 90's are bringing about a major change that has the potential to reshape the existing form of network computing, with the confluence of wireless and VLSI technologies, we are poised for yet another computing revolution. ". (Jim Grier 'Wireless lans'2001) Figure (1.0) shows a network plan of Surrey County All Girls School. The school has 2 main teaching buildings, which are separated by a recreation building but interconnected by an Ethernet LAN. The School Dean has decided the recreation building that has no computing facilities will be converted into a teaching facility but due to the historical nature of the building, cabling the whole building would be difficult. The floors and walls were made of very thick sandstone and historic plaster ceilings could not be easily drilled into. The only feasible solution was a wireless LAN. Wireless LAN exist in several specifications and standards, the emphasis of this solution is using IEEE 802.11 i.e. using 2.4 Ghz operating frequency and data rates of 1Mbps and 2Mbps.It use's spread spectrum modulation. There are alternatives such as HiperLAN operating in the 5 GHz radio band and data transfer rates up to 24 Mbps. ...read more.

Due to the large number of relatively large number of access points the school users will be able to move seamlessly (called roaming) on the floor. The access points 'hand' the client from one to another in a way that is invisible to the client (similar to how mobiles phones pass from one cell site to another).Extension points can also be used to further extend coverage however for this solution it was more cost effective to use extra access points. The solution will be implemented using the Proxim RangeLAN2 product range from: Unwired Solutions.Com (UK Based Company) Figure 1.4 and fig 1.5 shows the RangeLAN2 Network Card and Adapter, a wireless network card (NIC) is required for each client on the wireless network. The RangeLAN2 7920 Ethernet Adaptor operates no matter what network operating system or hard platform is used (allowing for future multi-vendor upgrades) The RangeLAN2 7920 Series Ethernet Adapters support wireless connectivity to it. Internal bridging feature in the RangeLAN2 Ethernet Adapters automatically forwards packets as required with no modification to the applications. The Specifications includes the supporting of 15 independent channels and a range of 150 metres in doors. It communicates with wired Ethernet via RangeLAN2 (as in this case) or any other open air certified access points (OPAC) or extension points (EP's)There is full support for RangeLAN2 roaming for seamless roaming, has the capacity for up to 16 domains for simultaneous independent networks (only 3 will be used though) and operates using encrypted ID. ...read more.

Other considerations include unwanted interference. Interference maybe caused by simultaneous transmissions, multi path fading or other external sources e.g. military base communications. Another limitation could be path loss between transmitters and receivers, however within this indoor solution we can expect path loss to increase 20db every hundred feet (but the planned network can easily manage applications due to the large number of access points). Another challenge could be power consumption; wireless devices are typically powered battery powered so there are inherent limitations to the usage. Other service limitations could include problems with the TCP/IP over the wireless LAN. Issues that may affect performance such as difficulty in dealing with mobile node address's (problems occur with roaming IP address's but can be solved using Middleware although at further expense).The high overhead cause problems, TCP connection orientated protocols consume large amount of bandwidth therefore deteriorates the LAN performance. One other major issue could be the incapability to adjust under marginal conditions i.e. TCP is fairly rigid when affected by changes in wireless coverage causing the protocol to terminate the connection, thus requiring re-establishment of the connection. So in conclusion, although flexibility and mobility make wireless LAN's both effective extensions and attractive alternative's to wired LANs the implementation of a wireless LAN is much more involved than wired networks such as Ethernet. Wireless LAN's require a more in-depth understanding of requirements, such as range and potential interference, and additional thought on the number and placement of access points. Word Count: 1649 ** All images bar figures 1.0 and 1.2 are courtesy of Wired Solutions (Web site address below) http://www.un-wired.co.uk/acatalog/index_products_and_services.html Dates used: 02/12/01 http://www.xilinx.com/esp/home_networking/pdf_files/wireless_lans/wlan-complete.pdf : 25/11/01 www.vlana. ...read more.