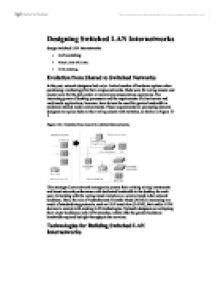 Designing Switched LAN Internetworks design switched LAN internetworks: * LAN switching * Virtual LANs (VLANs) * ATM switching Evolution from Shared to Switched Networks In the past, network designers had only a limited number of hardware options when purchasing a technology for their campus networks. Hubs were for wiring closets and routers were for the data center or main telecommunications operations. The increasing power of desktop processors and the requirements of client-server and multimedia applications, however, have driven the need for greater bandwidth in traditional shared-media environments. These requirements are prompting network designers to replace hubs in their wiring closets with switches, as shown in Figure 12-1. Figure 12-1: Evolution from shared to switched internetworks. This strategy allows network managers to protect their existing wiring investments and boost network performance with dedicated bandwidth to the desktop for each user. Coinciding with the wiring closet evolution is a similar trend in the network backbone. Here, the role of Asynchronous Transfer Mode (ATM) is increasing as a result of standardizing protocols, such as LAN emulation (LANE), that enable ATM devices to coexist with existing LAN technologies. Network designers are collapsing their router backbones with ATM switches, which offer the greater backbone bandwidth required by high-throughput data services. Technologies for Building Switched LAN Internetworks With the advent of such technologies as Layer 3 switching, LAN switching, and VLANs, building campus LANs is becoming more complex than in the past. Today, the following three technologies are required to build successful campus networks: * LAN switching technologies o Ethernet switching-Provides Layer 2 switching and offers broadcast domain segmentation using VLANs. ...read more.

Figure 12-3: Sample LAN switch configuration. When a LAN switch first starts up and as the devices that are connected to it request services from other devices, the switch builds a table that associates the MAC address of each local device with the port number through which that device is reachable. That way, when Host A on Port 1 needs to transmit to Host B on Port 2, the LAN switch forwards frames from Port 1 to Port 2, thus sparing other hosts on Port 3 from responding to frames destined for Host B. If Host C needs to send data to Host D at the same time that Host A sends data to Host B, it can do so because the LAN switch can forward frames from Port 3 to Port 4 at the same time it forwards frames from Port 1 to Port 2. Whenever a device connected to the LAN switch sends a packet to an address that is not in the LAN switch's table (for example, to a device that is beyond the LAN switch), or whenever the device sends a broadcast or multicast packet, the LAN switch sends the packet out all ports (except for the port from which the packet originated)-a technique known as flooding. Because they work like traditional "transparent" bridges, LAN switches dissolve previously well-defined workgroup or department boundaries. A network built and designed only with LAN switches appears as a flat network topology consisting of a single broadcast domain. Consequently, these networks are liable to suffer the problems inherent in flat (or bridged) networks-that is, they do not scale well. Note, however, that LAN switches that support VLANs are more scalable than traditional bridges. ...read more.