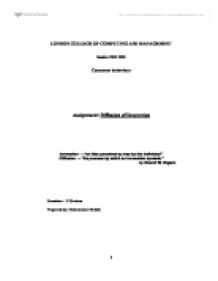 LONDON COLLEGE OF COMPUTING AND MANAGEMENT Session 2004-2005 Consumer behaviour Assignment: Diffusion of Innovation Innovation � "an idea perceived as new by the individual" Diffusion � "the process by which an innovation spreads." By Everett M. Rogers Examiner: T Graham Prepared by: Mohammed Mohsin Contents 1. Introduction 2 2. Definition 2 3. The Consumer-adoption process 2 4. Mechanism of Diffusion 3 5. Elements of Diffusion 3 6. Innovation 3 7. Communication 5 8. Social System 5 9. Time 6 10. Adopters 6 11. Conclusion 8 12. Bibliography 8 Introduction Have you ever as a child thought becoming a hero over night to save the world from bad people? Why do children think of becoming a hero at that age, rather than becoming a tycoon like Bill Gates? Where as when you grow up you daydream about how you could have been rich if you would have thought about speed courier like DHL or may be some other innovation which no one had given a thought about or even if they did, it was not known to social system. As child every one has this perception that only heroes are successful and worthy of respect with regards to rich people, because we were influenced by our friends that the stronger is cool...This was how we used to be influenced or in other words those comic books were the best way of diffusing the innovation of those authors. But now we know that money matters a lot. The idea about innovation of a new product or service always brings in a huge pile of money if it is successfully communicated through a social system. All our perceptions change over time due to the kind of influence it has upon us. Since we want to make more money we think of new ideas or concepts, which are known as Innovation. Let's study a bit in detail to understand the concept of innovation and how it is diffused. ...read more.

It is important to note that these five characteristics are not the only ones that affect the rate of adoption. Also the adoption of an innovation is not always a positive occurrence. Over-adoption, where adopters act irrationally without all the information or without full understanding of an innovation can actually be harmful to the diffusion process. Communication With the addition of steps to the communication process, the idea of personal influence comes into play. Personal influence refers to any communication between two individuals where one individual creates a change in consumer behaviour in the other. A more practical way of stating personal influence is peer pressure. Looking at the three different types of selectivity shows why personal influence can be a stronger factor in the diffusion process than mass media. * Selective exposure - the idea that an individual will be more vulnerable to channels of communication, that already agree with their current attitudes and feelings (an American will listen to American media and not Arab so they will never hear the other side). * Selective perception - the idea that an individual will view new ideas in relation to their old ones. * Selective retention - the idea that an individual will mainly remember a new idea if directly relates to their own situation or medication on specific problem. (an advert showing how you could stop u hair fall) Social Systems Social systems are referring to the group or segments of people that an innovation diffuses through. Earlier it was mentioned that who the people are can determine how they will adopt innovations. Social systems can be split into two categories of norms: traditional and modern. [4] According to Rogers traditional norms are characterized by: > A less developed or complex technology > Low levels of literacy and education > Little communication between the social system and outsiders > Lack of economic rationality > One-dimensional in adapting and viewing others According to Rogers modern norms are characterized by: > A developed technology with ...read more.

[5] What we have disused could be understood by looking at its graph given: Source: [6] Conclusion We have been able to study different ways of consumer-adoption process, mechanism and elements of diffusion. The conclusion that can be drawn is that, every one can innovate, yet does not do so because it is not so simple and innovation is meaningless without its diffusion. Knowing proper channels of communication and diffusion is not enough; one has to realize and be prepared for the result of the diffused innovation. He/she has to be fully prepared for the risk involved in it. "The process of the diffusion of innovation has been around since the first new idea popped into some ones head. Before Gabriel Tarde people did not just adopt an innovation because they got a free coupon. They went through the same process as we do today. The diffusion process is not a math equation or a chemical reaction but rather a natural progression of peoples' attitudes, opinions, and feelings towards accepting a new idea". [5] The diffusion of innovations has four main elements: an innovation that is communicated in a particular social system over a certain amount of time. It is in its simplest form it is a communication process that can be plotted on an S-shaped curve. All four elements have many different factors that affect the outcome of the process as well as act intimately to affect each other. It is also evident that the diffusion process holds constant for social system adopting an innovation no matter that filed it is in. When looking at the diffusion process it is hard not to see the importance to the advertising world. Learning the process an individual as well as a society goes through before they will accept an innovation is vital to the success of any company that plans to be on the frontier of innovation. Just coming up with the idea first only gets you a part of the way there. You must realize and be catalysis for its diffusion into society. ...read more.