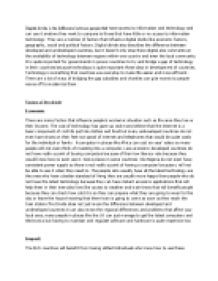 Discuss the Causes and Effects of the Digital Divide

﻿Digital divide is the difference between people that have access to information and technology and can use it anytime they want to compare to those that have little or no access to information technology. They are a number of factors that influence digital divide like economic factors, geographic, social and political factors. Digital divide also describes the difference between developed and undeveloped countries, but it doesn?t only stop there digital also comments on the availability of technology between regions within one country and even the local community. It is quite important for governments in poorer countries to try and bridge a gap of technology in their countries because technology is quite important these days in development of countries. Technology is something that countries use everyday to make life easier and more efficient . There are a lot of ways of bridging the gap subsidies and charities can give money to people worse off to modernize them. Factors of the divide Economic There are many factors that influence people?s economic situation such as the area they live or their Income. The cost of technology has gone up and many believe that the Internet is a basic component of civil life just like clothes and food but many undeveloped countries do not even have shoes on their feet not speak of internet and telephones that would be quite costly for the individual or family. A computer in places like Africa can cost six year? salary so many people will not even think of investing into a computer. ...read more.

This is arguably not fair because this poorer people are at disadvantage to other countries and this not give equal opportunities in life with those that are born where they cannot afford these technologies that most people own in the UK. As a result of this poorer countries are not able to bridge the gap and they continue to behind other well off countries. The development gap is in terms with economic factors and geographical factors, countries and the poorer side of the gap have a very poor standard of living because they do not have access to ICT and people on the more better side of living have a sustainable lifestyle because they can develop on their skills with the technology they have which will effectively help them in the workplace. Social; Another factor that contributes to the divide is social aspects, the use of technology may be dependent on age, gender, education, literacy and a persons working environment. Disabled people or other groups in society might be in fear of using technology; A person over 65 with no past experience may not feel the need to use technology as they will not feel it is relevant as they never used it in their generation. A teenager in this modern day and age will have a mobile phone, a laptop and a MP3 player, this is because most people around them have the same kind of technology and the teenager will start to think it is a normal way of life, but a person brought up in the 1940 will not have the same view on technology because they did not have it and nothing happened to them so it is not really useful. ...read more.

Computers are very useful because it gives people a wide amount of information as the internet is updated every second but not all the information could be real but deciding which of the information is right or wrong is the hardest thing when it comes to the internet. There also many company’s that donate computers to school like Tesco’s had a scheme that you collect a free voucher that goes towards free computers in schools when you spend £10 or more. This pacific scheme introduced by government and companies is quite good because schools get equipment free of charge. Creating cheap ways for people to access the internet is very important to closing the gap in technology. Evaluation; The Digital divide effects well developed countries to undeveloped countries. As technology continues to get better and better each day it has for poorer people to keep up with technology as their old equipment will become outdated and can no longer keep up with the high IT demands. A way of improving this could be like what Tesco’s do with their vouchers which is good because the company will be making profit and also would the school. The government of poorer countries need to take steps to invest in new technology which will make the country worse off in long term because taxes will be increased but for the long term this will make people have better IT skills which will educate the country because at this modern age a country cannot compete with other countries If it only specializes in producing agricultural goods like Ghana. In countries that have the required technology but do not use them as efficient as they should do the countries can introduce grants that will help people ...read more.