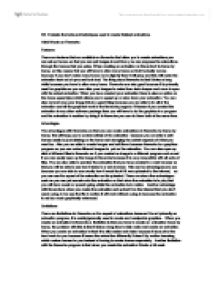 Evaluate the tools and techniques used to create finished animations

D2. Evaluate the tools and techniques used to create finished animations. 1000 Words on Fireworks Features There are features that are available on fireworks that allow you to create animations you can set up frames so that you can put images in and then you can progress the animations through the frames that you setup. When creating an animation on fireworks it is frame by frame, so this means that you will have to alter every frame so that it actually moves because if you don't make every frame move slightly then it will jump and this will make the animation look out of sync and look bad. The thing about fireworks is that it takes a long while because you have to alter every frame. Fireworks are also good because it is primarily used for graphics so you can alter your images to make them look sharper and more in sync with the actual animation. ...read more.

In Photoshop the animations that you create are generally very enhanced graphically because Photoshop is a program that is generally used for graphics and very powerful ones at that. Professional graphic designers will generally do there animations in Photoshop because Photoshop has allot more options that can be used for both graphics and animations. Photoshop is also the package that costs the most the newer version being CS4 costs in the range of �500 which is allot of money for a graphics/animation software creating program. Conclusion Overall I don't think that fireworks is a very good animation making program, everything just seems a little static to me, and there is not much going on. I prefer the flash animation over this because you are able to create animations allot faster than you can with the others. I believe that Photoshop is a very good animation program but it is hard to use. Really i don't think that fireworks is very good, it's ok for beginners to show them how animations work and how to create them but that's pretty much it. ...read more.