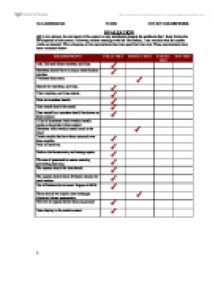 Evaluation of my database project for a car sales business.

EVALUATION (ei) In my opinion, the end result of the system is very satisfactory despite the problems that I faced during the development of the system. Following various meetings with Mr. Ghulraham, I can conclude that the system works as intended. This is because all the requirements that were specified were met. These requirements have been evaluated below: REQUIREMENTS FULLY MET MOSTLY MET PARTLY MET NOT MET Add, Edit and delete member, and Cars. Members should have a unique identification number. Validated data entry. Search for members, and Cars. View member, and Cars details. Print out member details. Cars rented should be stored. Cars rented by a member should be shown on their account. A list of customers with overdue rentals needs to be printed when needed Members with overdue rentals need to be fined. Delete rentals that have been returned over three months. Print off archives. Reduce the bureaucracy and storage space. The use of password to ensure security, preventing data loss. The system should be form based. The system should have different colours for each section. Use of buttons due to users' degree of skills. There should be helpful error messages displayed where appropriate. Preview all reports before they are printed. Date display in the rentals screen. Each requirement has been further looked at, discussing problems that I came across when I was fulfilling each requirement. * Add, Edit and delete member, and Cars: It was inevitable that this requirement had to be met as this is one of the critical aspects of the day-to-day activities of Cars Rentals. These functions (i.e. Add, edit and delete) can be performed on the Cars, Members forms. The add and delete function can be performed by the click of buttons; the simplicity of Access allows the user to directly edit a field by simply clicking and typing the new data, so there was no need to make a button to allow this function. ...read more.

However, the most important parts where data entry was critical, validation rules and validation text were set to display helpful error messages. All the error messages have been written in a way that it informs that user on what they have done wrong and how they can fix the mistake. When data entered into a field does not obey the rules that have been set in the field properties for that particular field, an error message will appear and tell the user what they have done wrong and how they can fix it. The specifications described below are ones that were later set by Mr. Ghulraham after I showed him the system that I created. * Preview all reports before they are printed: New buttons were created in the reports menu to allow reports to be previewed before they were printed to ensure that the report being printed is the correct one. I feel that this was successfully achieved. * Date display in the rentals screen: I feel that this specification was fully met as it is evident that the date is displayed in the Rentals form. This is important for when dates are been entered to help the user know the date at that particular time. USER RESPONSE TO SYSTEM (eii) From the last meeting I had with Mr.Ghulraham, he appeared to like the system and thought that all the specification was met. He sent me a letter of acceptance to show his final decision on how to implement the system. During the creation of the system Mr. Ghulraham and Mr. Uness at Car Rentals were very helpful as they did not hesitate to provide all the information required for the system. During the investigation and analysis stages, I carried out two interviews with Mr.Ghulraham and Mr. Uness. They were both friendly and gave suggestions on what could be done to make the system satisfy their needs. ...read more.

Without instructions, the staff will not no what the preview button is for as it is not self explanatory. These buttons were not named as there was not enough space so icons were used instead. If there was more time I could have added captions to describe what the buttons do when the cursor is pointed on the button. The calculation that fines members for overdue rentals provides a minus fine if the rental is returned early and provides a positive fine if it is late. Even though the specification was still met as it fined members with overdue rentals, I would have preferred it if a fine was only displayed if the rental was overdue. This would make it more effective and convenient to use. Some function within the system will need to be only performed by Mr. Ghulraham, so having access rights would have been more effective. This could not be done due to my limited expertise in using Access. However, since this was not stated in the specification, I have little doubt if this will come at a cost to Mr. Ghulraham. Extendibility: In the future the following additions can be made to the system to make it more efficient: * Create a website to allow members to order rentals online. This function can be done in Access by linking and creating a webpage, where members can register on online application forms etc. * Linking the database to a spreadsheet to calculate weekly takings of the business. This will aid the finance aspects of Hatch end cars. This can also be done in Access by adding up the Cars rented and presenting it in a spreadsheet where calculations can be made. * Produce mail merge in Word Processor to allow letters to be sent out to members. This can be done by exporting details of members and the Cars that are overdue to a standard written letter in Word Processor. These letters can be printed off and sent to individual members. ?? ?? ?? ?? M.A.OMERZEDA 13 RED 2516 ICT COURSEWORK 1 ...read more.