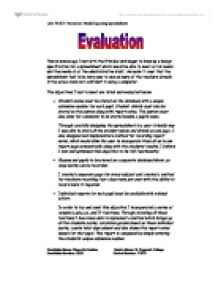 Evaluation of the database

Twelve weeks ago I met with the Principal and began to draw up a design specification for a spreadsheet which would be able to meet all his needs and the needs of all the administrative staff. He made it clear that the spreadsheet had to be very easy to use as many of the teachers already in the school were not confident in using a computer. The objectives I had to meet are listed and evaluated below: * Student names must be stored on the database with a unique admission number for each pupil. Student details must also be stored on the system along with report notes. The system must also allow for comments to be stored beside a pupil's name. Through carefully designing the spreadsheet in a user-friendly way I was able to store all the student names and details on one page. I also designed and implemented a method for recording report notes, which would allow the user to incorporate them all onto one report page automatically along with the students' results. I believe I met and optimised this objective to its full functionality. * Classes and pupils to be stored on a separate database/sheet, so class marks can be recorded. I created a separate page for every subject and created a method for teachers recording four class tests per year with the ability to record more if required. ...read more.

I did not include forms as I found in was quite easy to put in data the manual way and in order for list boxes to be used forms could not. I also reviewed the benefits and disadvantages to including forms and came to the conclusion that they would confuse staff too much, so I did not include them. I believe that through closely working to meet the original objectives, I have created a spreadsheet that is fully functional, easy to use and meets all the Principal's requirements. Through closely sticking to my design specification and my original plans I was able to constantly keep the design process progressing. Although when I actually came to including some of my original plans they caused issues and I even left some out such as the forms. Throughout my designing of the spreadsheet I encountered many problems and difficulties which I had to quickly overcome to keep on schedule. I concentrated on all the tasks and eventually successfully overcame all the problems and kept on schedule. As the Principal also had a lot of free time on his hands and it is quite a small school I was able to work closely with him throughout the process and we were both constantly adding and removing new functions. In total I had 6 weeks to design a fully functional spreadsheet and I found this the major disadvantage in the designing process. ...read more.

This also meant there was a lack of time due to the fact that the spreadsheet could only be worked on within the school. Also although constant meetings with the Principal helped me ensure the spreadsheet was best designed he was constantly making amendments which were very time consuming. I also still had to make an appointment with the Principal each time I met him which also wasted vital time. Also the fact that I was not able to get the rank order function to function properly is also a major weakness. I believe the key to designing a successful spreadsheet is working to a detailed specification, therefore if I was to undertake a similar project I would spend more time on the design specification. I also believe that good time management skills are vital to ensure targets are met on time. I believe that I have met the objectives I set out to do and my solution is easy to use. If doing this project again I would like more time. I realise now that the time spent on planning and design was invaluable to me. I would also test every single function and user aid used. I also got some feedback from the Principal and his staff. Their comments are useful and I would certainly use them if doing this again. Overall I am pleased with my finished project. ?? ?? ?? ?? Unit 10 ICT: Numerical Modelling using spreadsheets Candidate Name: Shane McCudden Centre Name: St. Eugene's College Candidate Number: 5032 Centre Number: 71979 ...read more.