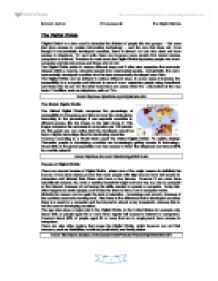 Everything about Digital Divide

The Digital Divide "Digital Divide" is a term used to describe the division of people into two groups - the ones that have access to modern information technology - and the one that does not. Even though in economically developed countries, there is almost no one who does not have access to telephone, TV, and radio, there are however many people that cannot access computers or internet. Therefore in most cases the Digital Divide separates people who have computer and internet access and those who do not. The Digital Divide exists in various different ways and it often also separates the economic classes within a country, educated people from uneducated people, and globally, the more economically developed countries from the less economically developed countries. The Digital Divide can be defined in various different ways. In some cases it includes the accessibility to a computer and internet, in some it even separates people using broadband and those who do not. On the other hand there are cases when it is only looked at the very basic IT facilities, such as telephone, radio or TVs. Source: http://www.digitaldivide.org/dd/digitaldivide.html The Global Digital Divide The Global Digital Divide compares the percentage of accessibility to Computers and Internet over the whole globe. ...read more.

and family status. Source: http://dspace.dial.pipex.com/town/parade/hq69/Protected/Features/Digital%20Divide.html Technological ECONOMY - Although the Global Digital divide is narrowing every year, there is still the problem that there will be still countries with very low percentage of IT users. The main reason for this is that in developed countries, which are usually wealthier than developing countries, Information Technology is being taught at schools. Now even primary schools in some developing countries have also started teaching children about IT (computers/internet), which clearly shows that in future more people will have knowledge and therefore access to IT equipment regularly. On the other hand the problem occurs in developing countries where IT is partially completely unknown. This shows that in those countries IT will not be that well-known even in future. So according to that, developing countries will most likely have a brighter future in this issue. Within countries the problem is often that some schools have the facility to teach IT to its student, while others do not. The cause of this can be that some schools do not manage their finance properly or that they do not get enough finance. In extreme cases it can also be because of lack of IT teachers. ...read more.

This network works by volunteers, who want to be active in this field. Source: http://www.digitaldivide.net/about/ WHAT ELSE CAN BE DONE? Today there are a quite large number of organizations trying to provide developing countries with IT facilities and therefore trying to bridge the divide. However, for this to be successful people have to support these. Another major problem is that in developing countries the world changes very rapidly. There are people that buy a new computer or laptop every year. Therefore the older ones get useless as everybody wants the latest technology. This often results in the very old computers being thrown away as they are no more of use in developed countries. However it has to be taken into account that these older computers can be customized and given to developing countries, where these are not seen as "useless". This is something everybody can to decrease this problem. Furthermore governments should raise more awareness of this problem, as the majority of the people in developed countries might have never thought about this and therefore could not for instance support any charity organizations and projects. These points also show clearly that everybody can help narrow the gap even without even having to pay any money. ?? ?? ?? ?? Kamran Adnan IT Coursework The Digital Divide ...read more.