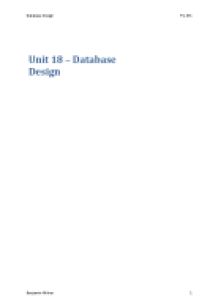 Tables - The tables in a relational database is set out in rows and columns. For an example of a table, the image above shows how the table is set out with the fields, rows and colons. A table is also just another term for relations. Primary Key and Foreign Key The primary key is what sets up the relationships within the database. The primary key must be unique so the attribute must not repeat which means it will normally be a number of some kind for example if the Table was to keep a record for students the student ID would be used as no student will have the same ID as another student. The primary key defines the relationship with multiple tables by becoming a foreign key in the next table so they link, the foreign key will remain the primary key in the first table. I will use the same example as above to show primary and foreign keys. This is a one-to-many relationship Here you can see the Primary keys in bold are ?Customer ID? for the customers table, ?OrderID? for the orders table and for the order details table the key is ?ProductID? For the relationship to work the primary key must be in the next table and be a foreign key, this is what gives the database its referential integrity. ...read more.