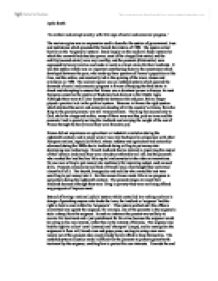 French pre-revolutionary Government - 'An archaic and corrupt society, with little sign of social and economic progress.'

'An archaic and corrupt society, with little sign of social and economic progress.' The ancien regime was an expression used to describe the system of government, laws and institutions which preceded the French Revolution of 1789. The system relied heavily on the 'seigneurial system', based largely on the medieval feudal system by which the monarch had absolute power, most of the clergy (first estate) and the nobility (second estate) were very wealthy, and the peasants (third estate) were oppressed by heavy taxation and made to work as virtual slaves for their landlords. It was this system which was an important contributing factor to the resentment which developed between the poor, who made up three quarters of France's population at the time, and the nobles, and eventually led to the uprising of the lower classes and revolution in 1789. The ancient regime was an outdated system which ignored the demands of social and economic progress in favour of keeping the third estate in check and attempting to ensure that France was a dominant power in Europe. In most European countries the system of feudalism had died out in the Middle Ages. ...read more.

Peasants owned only one third of French land, even thought they cultivated almost half of it. The church, bourgeoisie and nobility who owned the rest were unwilling to put money into it. For this reason France made little to no progress in agriculture during the eighteenth century. The peasants began to resent their landlords because although they were living in poverty they were not being offered any prospects of improvement. Instead of having a national judicial system which controlled law making and was in charge of punishing anyone who broke the laws, the landlord or 'seigneur' had the right to hold a court within his 'seigneurie'. This system worked until the offence committed was against the seigneur, for example, one of the peasants in the seigneurie stole a sheep from the seigneur. In such an instance the peasant was unlikely to receive fair treatment and a just punishment for his crime because the seigneur would be acting in his own interest, rather than in the interest of fairness. The seigneur also had the right to collect 'cens' (money) and 'champart' (crops), and to monopolise the seigneurie's flour mill, bread oven and grape press, serving to wring even more money out of the peasants who could already barely afford to keep themselves. ...read more.

France was in serious debt having spent much money on fighting wars in both Europe and America. The only way for the government to make money was to put up prices on goods and increase taxation on the poor, who felt they were being exploited and called for a system of 'progressive taxation' whereby people were taxed in accordance with how much they earned. The taxes which were imposed restricted the growth of industry and trade and the increase in food prices led to riots among the lower classes. The French government did not seem to be able to manage their finances so that the economy would improve and the people would feel fairly treated. In conclusion, the ancien regime was clearly an outdated, old fashioned system which was biased towards the wealthy and did nothing to improve the French economy. Instead of making France more powerful the ancien regime heightened tensions within the country and created unrest among the peasants who began to resent the government for taxing them, the landlords for treating them badly and the King for failing to do anything to rectify the situation, resulting in discontentment which increased over the years until it came to a head in the revolution of 1789. Lydia Smith ...read more.