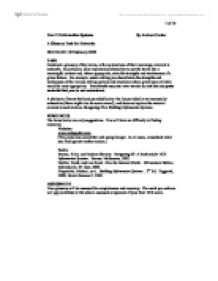 Glossary Task for Networks DUE DATE: 18 February 2005 TASKConstruct a glossary of key terms, with explanations of their meanings, relevant to networks

Year 12 Information Systems By Andrew Cooke A Glossary Task for Networks DUE DATE: 18 February 2005 TASK Construct a glossary of key terms, with explanations of their meanings, relevant to networks. In particular, your explanations should try to put the terms into a meaningful context and, where appropriate, state the strengths and weaknesses of a given feature. For example, under cabling you should state the strengths and weaknesses of the various cabling options and situations where given types of cable would be most appropriate. You should use your own words: do not cut and paste material that you do not understand. A skeleton of terms has been provided below: the list provided is not necessarily exhaustive (there might also be some errors!), and does not replace the material covered in such texts as Navigating IS or Building Information Systems. RESOURCES The items below are only suggestions. You will have no difficulty in finding resources. Websites: www.webopedia.com [You could also search the web using Googol. In all cases, crosscheck what you find against another source.] Books: Barnes, Allan, and Andrew Stewart. Navigating IS: A Textbook for VCE Information Systems. Barnes: Melbourne, 2002. Derfler, Frank, and Les Freed. How the Internet Works. Millennium Edition. Indianapolis, IN: Que, 2000. Fitzpatrick, Michael, et al. Building Information Systems. 2nd Ed. Tuggerah, NSW: Social Science P, 2002. ASSESSMENT Your glossary will be assessed for completeness and accuracy. The mark you achieve will not contribute to the school-assessed component of your final VCE score. Note: the number of dashes, "-", in questions where you are asked to fill-in missing letters, is (or should be!) the number of letters missing; a series of dots, " ... ", indicates that you are expected to write more than a word or two. ------------------------------------------------------------------- ADSL stands for: Asymmetric Digital Subscriber Line It is used on the Internet because it allows more data to be sent over existing telephone lines ------------------------------------------------------------------- Bandwidth: Bandwidth is a measure of how much data can travel and how fast it travels It is measured for digital devices in units of bps and in units of Hzs for analog. ...read more.