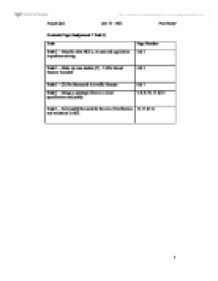 HCI is known for Human Computer Interaction, and basically it interacts with user and the system that contains computer chip in it. The main objective of HCI is to improve the interaction between the users and computers by making it computers more respons

Contents Page (Assignment 1 Task 1) Task Page Number Task 1 - Describe what HCI is, its uses and application in problem solving. 2 & 3 Task 1 - Make Up case studies (1) - 3 Mile Island Nuclear Accident 4 & 5 Task 1 - (2) The Swanwick Air traffic Disaster 6 & 7 Task 1 - Design a prototype form to a client specification and justify. 7, 8, 9, 10, 11 & 12 Task 1 - Fully justify the need for the role of verification and validation in HCI. 12, 13 & 14. Assignment 1 Task 1 (P1, P2 (1)) 1) Describe what HCI is, its uses and application in problem solving. HCI in nowadays is used by almost everyone, and the main objective of HCI is to improve the understanding of Humans with the computer systems. HCI is known for Human Computer Interaction, and basically it interacts with user and the system that contains computer chip in it. The main objective of HCI is to improve the interaction between the users and computers by making it computers more responsive and interested to the user's need. HCI Components There are 3 components of HCI as follows. 1) User (Human) User is someone that uses the system to produce the outcome; he or she has to gain the conclusion from the tool. Another definition of user is that, he or she uses the system that is designed for and benefits him/her. To be a user, the person must; * Recognise the system's utility. * Identify the required events. * Know the relevant instructions or operations. * Recognize and know the system. * Process the necessary skills. There are 4 different types of user's that can use the system. I will describe all of them. 1) Na�ve - This name is given to a person that doesn't know any thing about the system, like doesn't have a clue how to use it. ...read more.

in two months, controllers at its Swanwick centre were forced to halve the number of aircraft movements for five hours from 6:30am. The glitches are thought to have been caused following a routine monthly upgrade of the Swanwick computer system overnight on Thursday, which appeared to have gone to plan. However, a spokeswoman for NATS said: "When the morning shift arrived, they found they could operate only about half the workstations. "To safeguard our safety standards, this resulted in us reducing by half the number of aircraft coming into the system." Main Problems This is what one of the main workers had to say about the system. "Controllers' screens were not clear enough to be safe, he said. The screens had green labels for planes the staff were working with, and white labels called "background tracks" for planes the operator was not talking to. The controller said these background tracks were a "serious" problem, because they were not bright enough to be seen clearly. "A controller descending or climbing an aircraft with a green label may not see the white label in confliction with it." There's not enough contrast in my opinion to safely operate these screens." From this persons statement I can tell that the system's interface design was not very good. The contrast of the colour was not bright enough to be seen clearly, and the controllers were finding it difficult to control it. This is a serious issue that managers should have looked at, and sorted it out, but they didn't. Inductive reasoning The main reason was that due to poor screen design; workers couldn't see the screen clearly. Abductive reasons The main reasons were poor interface system, as the screens were not clear enough for the workers to analyze the system. Lack of staff support was another major factor for the system to collapse. Solutions It could have been avoided if they had a better computer interface design and more staff at the scene. ...read more.

User will also have to type in their password to gain access through their account that he/she will open with Liverpool FC. If the user types in one email address in the 1st text box and different in the other then system will let user know that your email address in invalid. This process doesn't allow user to complete the form until he/she has typed in the correct email address and password. This process is called Validation and Verification. Continued from v&v.... HCI HCI is highly involved in this process as User (Human) inputs email address, Computer (System) processes the details to validate the email address, and Interaction in the process is Keyboard, which is used to type in the email address. All three components are important in v & v process. HCI (Humans, computers and interactions) rely on each other heavily, the whole system will fail if you try to start any business organization. To make an email address or an account using your email address, user can use any forms of letters available of key board. For example, he can type in [email protected] He is allowed to use just letters, numbers or both of them, he can also use the _ or - to create an email address. When a user is wants to create an account with a website like apple.com, user will have to choose a password and the password must contain letters and numbers only, you are not allowed to use signs, like -, etc. This print screen shows apple website, you can see that they are asking new users that wish a open an account apple, to type their email address and new password. To make sure that user types in correct and sensible password. System is asking user to type in password and the password must be at least 6 characters and must only contain numbers and letters. This is a very good way to make sure user types in correct email address and password. ?? ?? ?? ?? Amjad Qazi Unit 12 - HCI Paul Henry 1 ...read more.