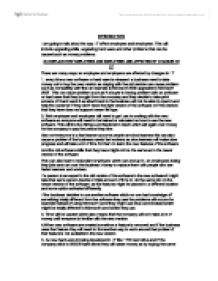 How employees and employers are affected by changes in IT

INTRODUCTION I am going to talk about the way I.T affect employers and employees. This will include upgrading skills, upgrading hard ware and other problems that can be caused such as money problems. M3 EXPLAIN HOW EMPLOYEES AND EMPLOYERS ARE AFFECTED BY CHANGES IN I.T There are many ways an employee and employers are affected by changes in I.T. 1, every time a new software or hard ware is released a business need to take money out to buy the new version as staying with the old version can cause problem such as compatibly with files an example is Microsoft 2003 upgraded to Microsoft 2007. This can cause problem such as if a buyer is having problem with an software or hard ware that they brought from the company and they decide to take print screens of it and send it as attachment to the business will not be able to open it and help the customer if they don't have the right version of the software or if the version that they have does not support newer file type. ...read more.

If the business decides to use another software which no one has knowledge off something totally different from the software they use the problems will occure for example instead of using Microsoft word they might use lotus word instead which might be totally different to Microsoft word which they use. 3, Time will be wasted which also means that the company will not make a lot of money until everyone is familiar with the new version. 4,When new software are created sometime a feature is removed and if the business uses that feature they will need to find another way to work around that problem if that feature is not available in the new version. 5, As new hard ware in being developed in I.T like 1TB hard drive and if the company stick to 500GB hard drives they will waste money as by buying the same hard drive instead of getting the latest one where they can save twice as much of data on it. 6, If a company works all over the world (globalisation or outsourcing) ...read more.

All the above are problems that can be caused when IT is changed by software or hardware and affect a company and business when they are done as there are some compulsory thing to do such as keeping up with the latest version of a software and operating system to maintain high quality of work. CONCLUSION My conclusion is that a business should try to stay ahead of the new software by trying out betas to get a little knowledge and use to the software so when the new software is installed they will have some knowledge on have the software is used or worked. For hardware they should check for tutorial on have to use the software before using it as having no knowledge on how to use a new hardware can damage it if it is not used correctly and if it does get damaged you just wasted money on buying it if it has no warranty or guarantee left on it. Or if you do something that will void the warranty by removing a label or opening it up and playing around with the hardware. ?? ?? ?? ?? ...read more.